Thoughts on Going on Holiday To Greece 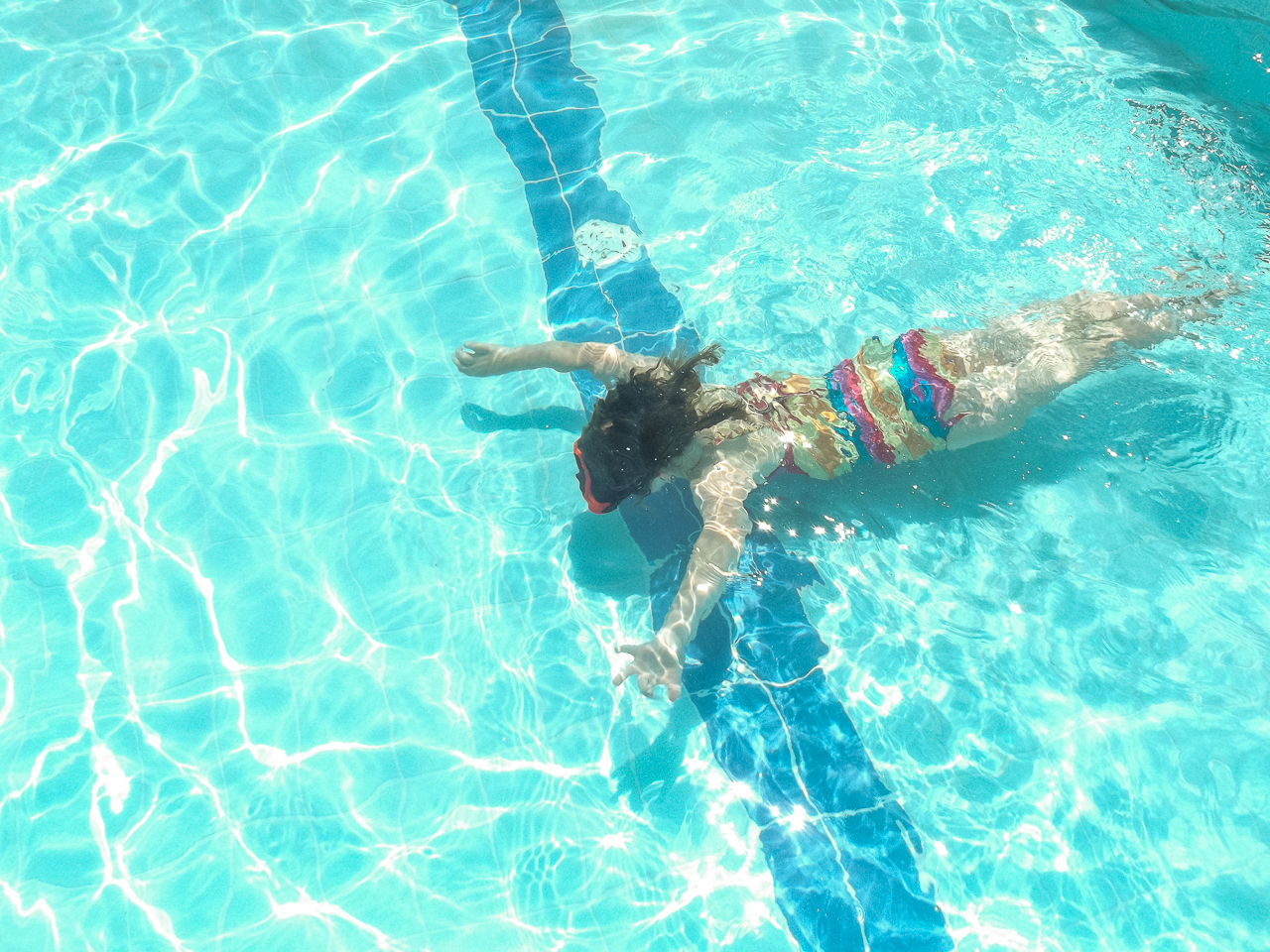 Greece has hardly been out of the news this summer, with woeful tales of their dismal financial status. The reports have told us who Greeks can’t withdraw money and how austerity is biting hard. All in all, the reports were miserable, and it seemed like it should be a place to avoid. This summer, both Rosie and Megan have travelled to Greece. Here, we answer some questions that we have formed from rumours we had heard and things people said to us before we went.

Can you get money out of the ATMs?

Megan: We didn’t, but I saw plenty of people using ATMs, and I certainly didn’t hear of anyone not being able to use them.

Rosie: While we were in Corfu bank withdrawals for residents were limited but we were able to withdraw cash from ATM’s without a problem.

How did you handle spending whilst you were there?

Megan: We took cash that we had changed into euros at our local bank. We put it in the safe at the villa and took out what we needed.

Rosie : As with Megan we found Greece has become (as it used to be) an entirely cash economy. We left the credit cards at home.

Is there a feeling of unrest?

Megan: Certainly not on the island, Skopolos, we visited. The Greek were their normal, friendly, hospitable selves.

Rosie: Absolutely not. The islands are friendly and welcoming.

Are services such as transport running smoothly?

Megan: Absolutely. We travelled by coach and ferry and had no problems on either.

Rosie: Flights were as normal and to be honest it was so hot we barely moved! Local buses were running as normal tho.

Is there any issue with electricity or other power supplies?

Rosie: There was a limited amount of interuption to power and water during our 8 day  stay on a couple of occasions. This is not that unusual for the islands when the huge increase in numbers during the summer months stretches infrastructure. Problems were very quickly rectified. 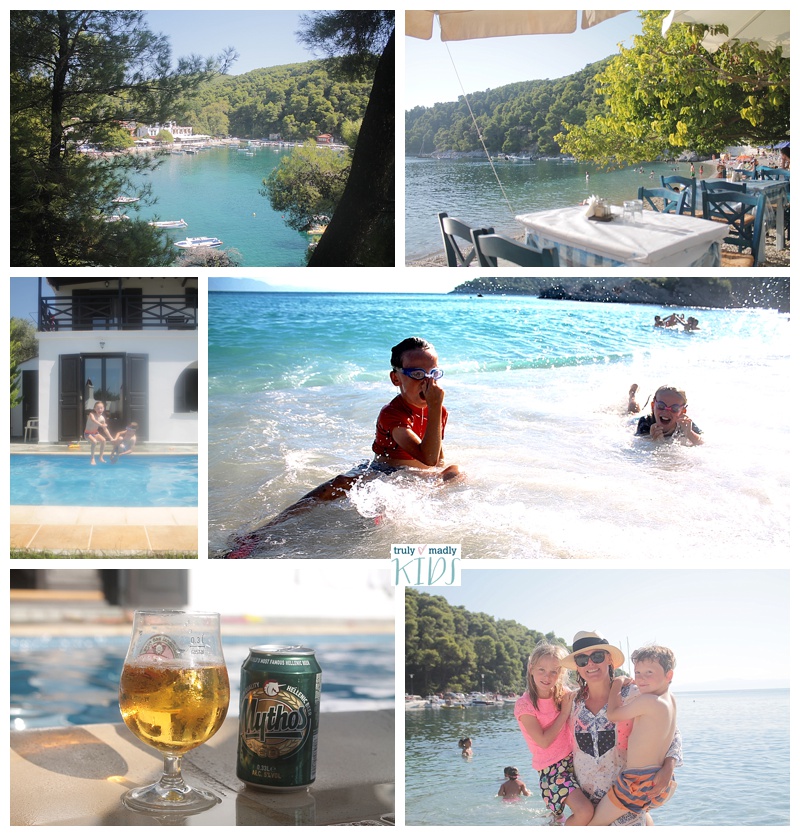 Is there any disruption to food distribution?

Megan: No, so much is locally produced, we had a plethora of beautiful fruits and vegetables and delicious food at restaurants.

Rosie: Locally sourced food meant there was no lack of beautiful fresh fish, seafood, vegetables and fruits – we ate royally for the week. Whether shopping in the local bakeries and market shops or eating out in simple restaurants every evening.

Megan: I visited Kefalonia 2 years ago, and Skopelos did seem slightly cheaper. Whether this is just differences from island to island or it is actually cheaper, I don’t know. A meal out for 4 with 2 courses for adults, and drinks cost us roughly 50 euros.

Rosie: I found Greece to be exceptionally reasonable, both the accommodation we booked (which was simple but beautifully designed and looked after) to the prices in the shops to eating and drinking out. Greece wants to encourage visitors to visit and to spend during their holiday.

I heard there is no loo roll, is this true?!

Megan: Ha! Far from it, the supply was bountiful!

Do you have any specific advice for travelling to Greece at the moment?

Megan: Just go! They need the tourism. It is still beautiful and always worth the trip.

Rosie : I couldn’t agree more with Megan. I am an out and out lover of Greece since I lived and worked there when I was 21 and I have visited many times since. It is beautiful, welcoming and a wonderful experience for families.

Would you return to Greece whilst the financial crisis is still ongoing?

Megan: Absolutely, we are thinking of going island hopping next year.

Rosie: Again, I totally agree – now our children are  a little older (10 and 8 next summer) we plan to sling on back packs and hop around the Cyclades on the fabulous ferry network. I also plan to celebrate a certain big birthday in Greece with girlfriends. It’s a country and a culture I simply  love.

Be prepared for everyone to chat with the children and do teach them a few words of Greek – at least enough to say hello – “gia’sas “, please –  “parakalo” and thank you “Efharisto’ poli'”. Expect late nights – going outfor dinner at 10 30 is still normal especially in more rural towns.

Rosie and family visited Corfu in the north west of Greece at the beginning of August. I chose Corfu as I hoped it would be cooler at that time than the islands further south (work dictated that was our week of escape!) but it was so hot that we fore went all tourist activities and spent a week by the pool and the beach in the beautiful little resort of Aghios Gordios on the west coast of Corfu. I can’t recommend it highly enough for those who want a quiet family time with a real Greek feel – it reminded me of “my ” Greece of nearly 30 years ago.

Megan and her family travelled to Skopelos, in the Cyclades chain of islands. 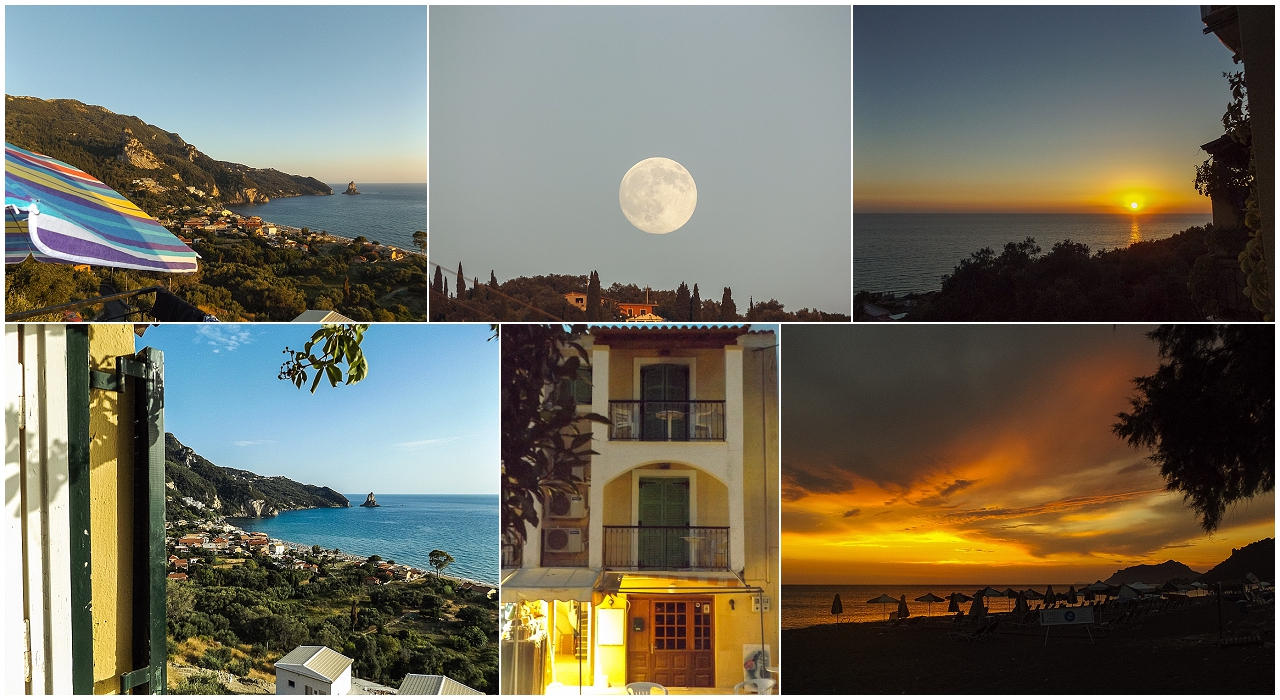 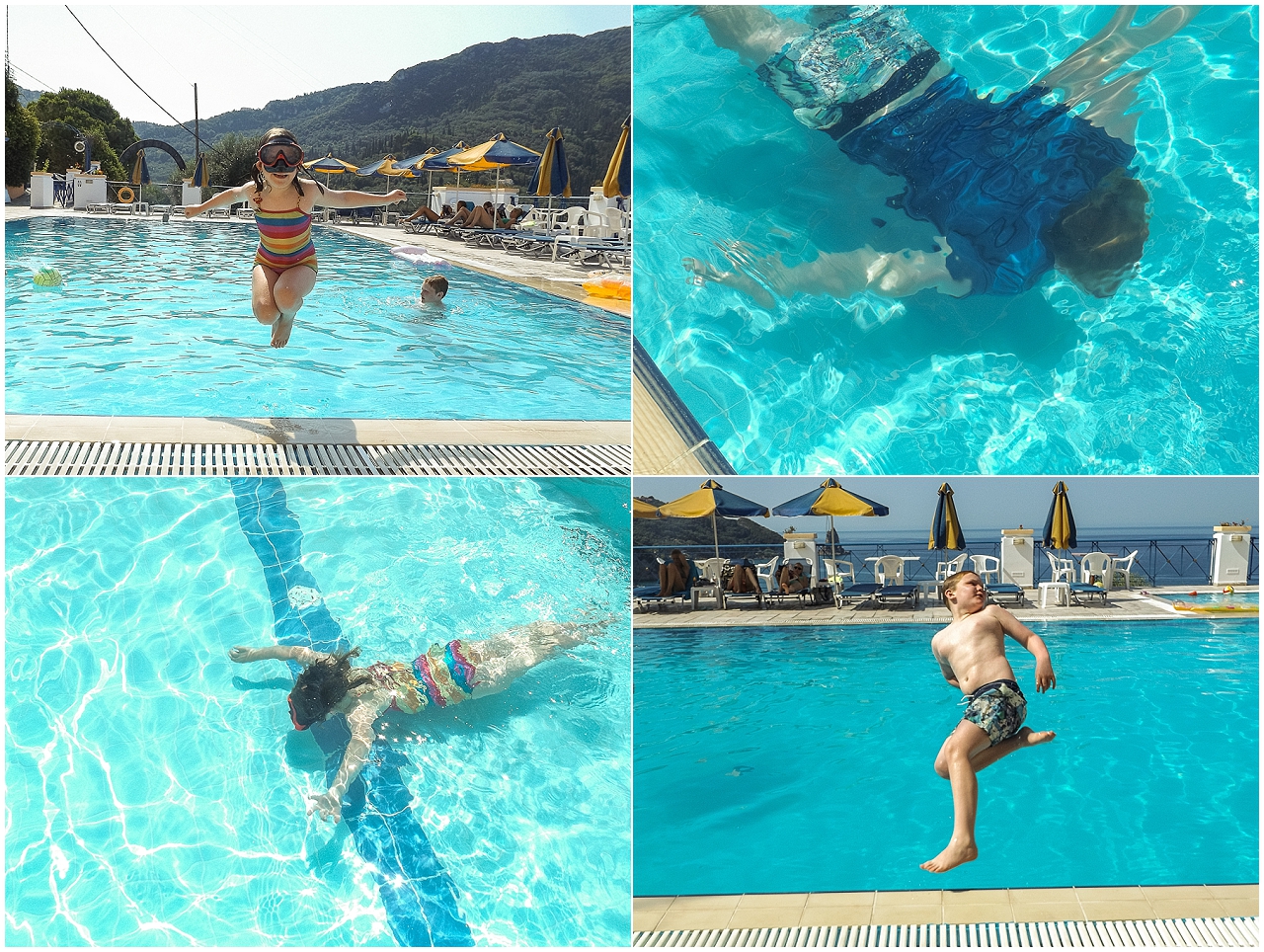