The World Went Mad – She brought a kitten into the house! 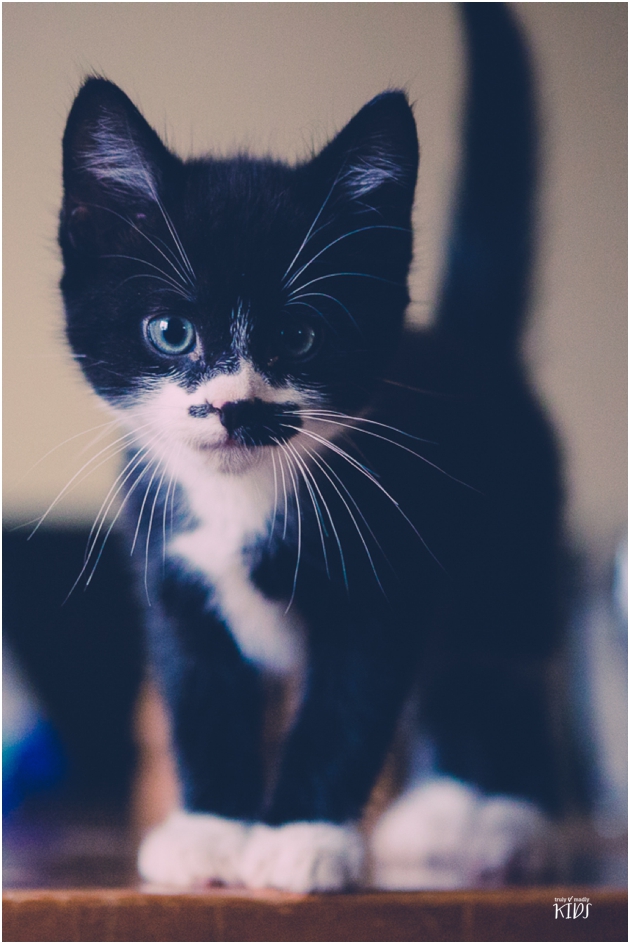 Grrr… Diggers here. What a week!

She Who Should be Obeyed had a sudden rush of blood to the head and went a got a kitten. I should point out that prior to its arrival I was being labelled a potential trouble maker (as if I, Mr Loverofeverythingandeveryone, would be trouble) as I am a terrier and like to chase the odd cat given half a chance. She honestly thought that I would be in therapy and that old Big Ears (Jess, the oh so perfect spaniel) would be her usual Goody Two Shoes self and take to the newcomer instantly. Oh how wrong was she!!!

Before Sid’s (that’s the kitten) arrival she made enquiries, along with joking about me eating him. When introducing cats and dogs don’t hold onto the cat (they scratch!), make sure they are all safe (in came the huge dog crate) and give everyone a bit of time and space to get adjusted… In she came with the pet carrier and  I thought this was the best thing ever and got a bit excited, barked, jumped up and down a bit,you know, all the stuff we are supposed to do when greeting a new visitor to the house, that sort of thing. Then I looked at Jess…

Bg Ears was rigid. She was pointing at the cage, quivering, staring and with her tail jammed firmly between her legs. OK, though I, best I take a step back here, I have read this all wrong! Jess lunged at the carrier, a bit like she does with a hedgehog, and SWSBO got very cross with all of us! So straight away she took Sid over to the dog cate/des res for cats complete with fancy bed, litter tray, food, water and really cool looking toys. Sid jumped in and proceeded to play with the new house, toys etc as though he had been there all his life. He’s very Brave. Jess had now become totally fixated. She couldn’t be distracted and she was quivering on a very menacing way. I had a bit of a sniff and decided this was all a bit boring, and besides the Boyfriend had arrived to help, and I love him so I went to help him make tea.

The humans decided to put us on leads and get Sid out. Well, I got excited again, although Sid took no notice of all that, and Jess made a lunge for Sid that I have a feeling would not have ended well if she was not on the lead. She had her teeth round his fat little tummy and left him covered in slobber. Sid, because he is very Brave, sat in front of her and had a wash… which she wasn’t best pleased with and tried for another lunge. SWSBO popped Sid back into the des res and had a think. Jess just stared at the cage, quivered a lot and could not be torn away… pretty much how she stayed for the next 36 hours except when she was taken for a walk or dragged off upstairs to bed. I chilled. Sid looked fun and I have better things to do with my time than hold a vigil by the cage. She took Sid to work, lucky him, so we all got a break, but SWSBO was starting to worry that she was ‘rewarding the wrong behaviours’ and other such doggy psychobabble stuff. She called for help ( she also spoke to a few people about whether they would like a kitten if it all went wrong!!!). 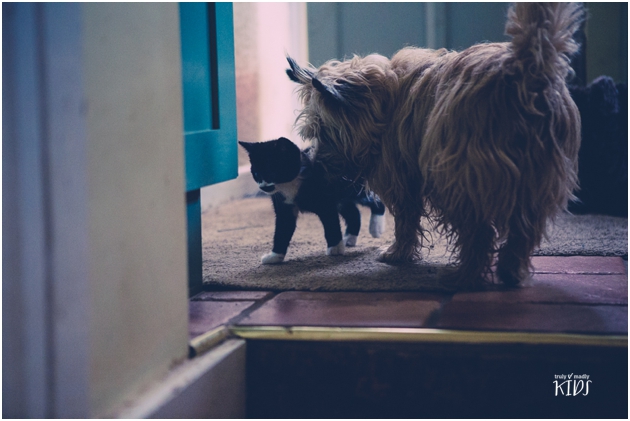 Help was great as far as I was concerned. help meant someone new to lick all over and the best thing was that she came with treats! Helen (the guru from The Behaviour Clinic) started about her magic and helped SWSBO sort out old Big Ears. They soon sussed that  am a lover not a fighter, and so I was dismissed for a snooze into the other room.  Jess was muzzled and put on a lead and then a whole lot of distractions were put in place to make her more relaxed. She also had some remedial training on her ‘leave’ command. That was the best bit because I got treats too, even though I wasn’t really doing the training. Helen left a prescription of things to do and steps to follow and then left. I could see that things were already changing. Jess could be called away from the kitten… and that was just after an hour!! It would be wrong to go through all the steps here because every case is different. Jess was ‘diagnosed’ as being scared aggressive towards Sid (SCARED!!!!! Of a cute fluffy kitten? Man up Spaniel!!!) and need to be shown that everything was OK, and she was rewarded for not obsessing. Also Sid wasn’t spending so much time in the cage, something Jess associates with rabbits, guinea pigs and all things prey. 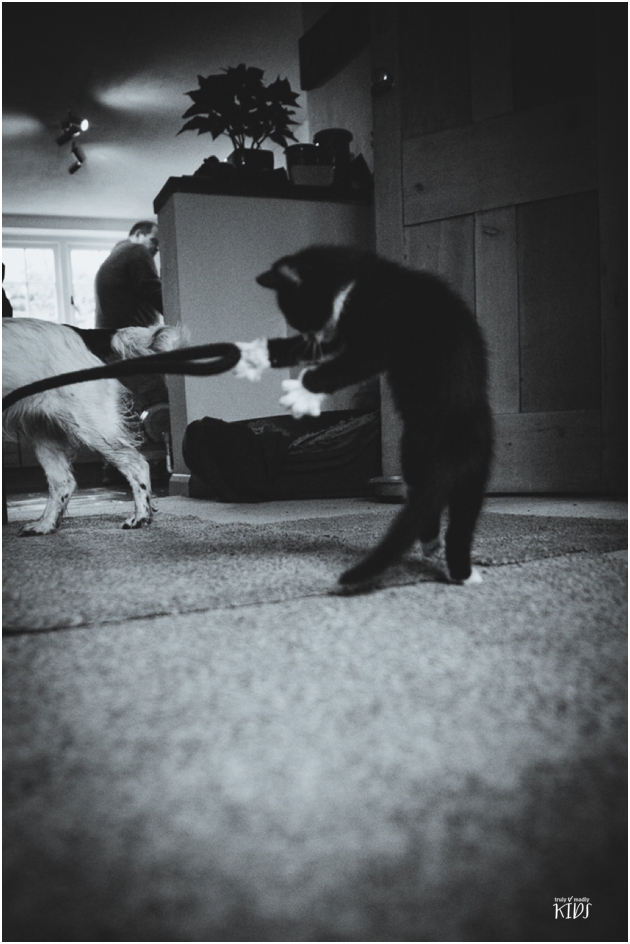 ANYWAY. Sid is now my new best friend! Two days after the visit from Helen he and Jess were curled up on the sofa together (with Jess on a lead just in case!) and he was being allowed to play with her big floppy ears. My favourite game with Sid is the one where he chases me from the dining room to the sitting room and then I chase him back again. We play that quite a lot. I also like to lick his bottom, although SWSBO gets cross with me for that, even though Sid doesn’t seem to mind at all. I would certainly recommend getting help with us furry friends… without Helen I wouldn’t have a new BFF!! 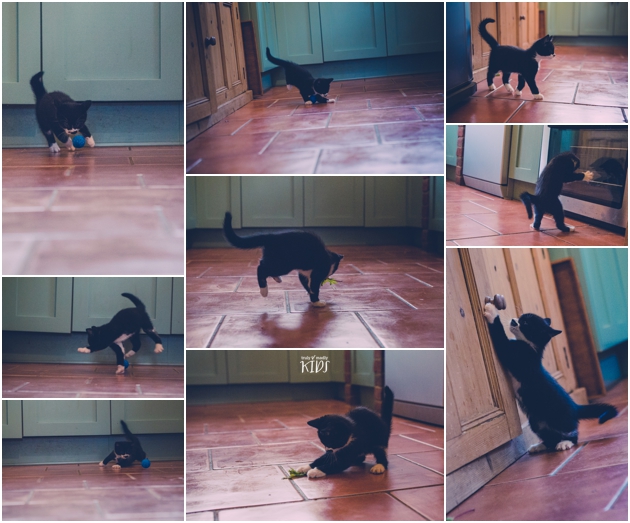 And for the record, although I don’t think they will be BFF’s Jess and Sid rub along alright together now… just three days later! 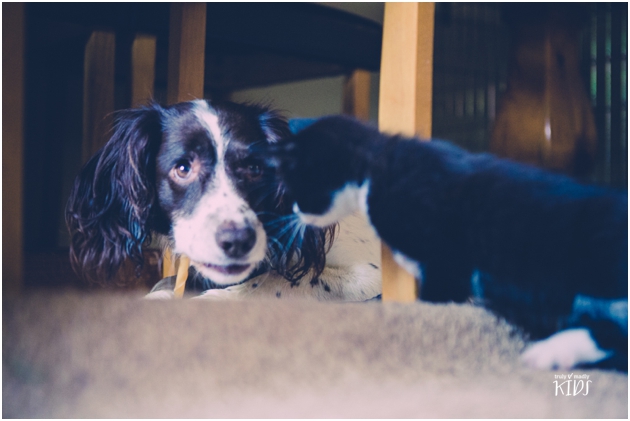