Temple run – our minibreak in Cambodia 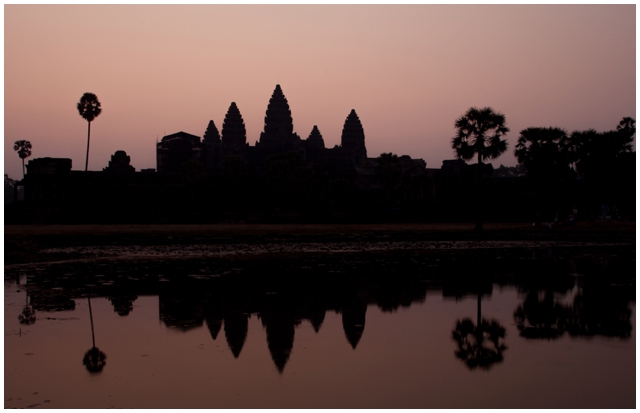 Any Crystal Maze fans out there? I used to obsessively watch this when I got in from school as a distraction from the ongoing pile of coursework I faced daily for my G.C.S.E.’s and would regularly fantasize about joining on an adventure into a temple or discovering a hidden vault. Move on a good 10+ years and Lara Croft burst onto our cinemas with a refreshing strong female lead protecting ancient artefacts whilst globe trotting in a pair of knee high boots and a perfectly white cotton tank top.

It wasn’t until this year that I finally managed to get up close and personal with some of the temples in Cambodia’s vast temple network which featured in the movie. And for 4 blissful days, my husband and I threw ourselves into all that it had to offer up.

Staying in a little boutique hotel just off a dusty track felt like we were mixing a bit of luxury (air con for a start) with being in the centre of the action and able to walk straight out onto the streets to explore once the check in was done. As this was our last break before returning to living in the UK we wanted to do both the temple tour and also see a little of the countryside too. Having lived in Asia for 3 years, we know that the food is something we both enjoy and we found that in Cambodia there was a beautiful delicate blend in their arrangements of spice in the curries and stews. A little less fiery than Vietnam or Shanghai but nevertheless just as tasty. We sampled everything we could from street food stalls to a Michelin starred restaurant which we had to find in the pitch dark using the torch function of our iphone’s down a little lane which made it feel even more adventurous!

The most memorable part of the trip was a dawn drive down dusty tracks through the jungle to witness sunrise at Angkor Watt Temple Complex. Getting up at 4:30am is never fun, but it was worth every bleary eyed step and yawn to stand amongst the hundreds of people and wait for the sun to light up the temple. Here are a few highlights of details of the stone carvings, temple buildings and architecture, shot during the daylight so you can see!

The complex was built in the 11th Century and it’s astonishing to see just how well preserved it is. Sadly as with so many important cultural archaeological sites, the looters have taken many artefacts which are now lost. But the major damage to the site is down to the shifting religious belief systems which have spanned to this day – leaving the iconography of these carvings has been deliberately destroyed. During the Hindu reign the Buddha imagery was removed from thousands of carvings and replaced or re-carved to show Brahma, Shiva and Vishnu. No mean feat when you stand at just one wall and realise that there are literally hundreds upon thousands of carvings and Angkor Wat is simply one of a network that stretches across the Siem Reap region.

The other temples we had time to visit were Bayan Temple, affectionately known as the temple of many faces (see the photo’s below) which has largely been restored by French and Japanese archaeological trusts who have painstakingly pieced individual stones like some huge jigsaw puzzle to re-create the large stone freezes which tell various stories of warriors, life in Cambodia and scenes of hero’s returning from journeys far and wide.

The temple where Tomb Raider was shot is called Ta Prohm. It has uniquely large trees which with their extensive roots have grown up, through and around the stone structures of the temple and has a really special spiritual feel to it. The trees in places seem to almost hug the stone temples and create the only part of shady canopy to escape the hot sunshine. 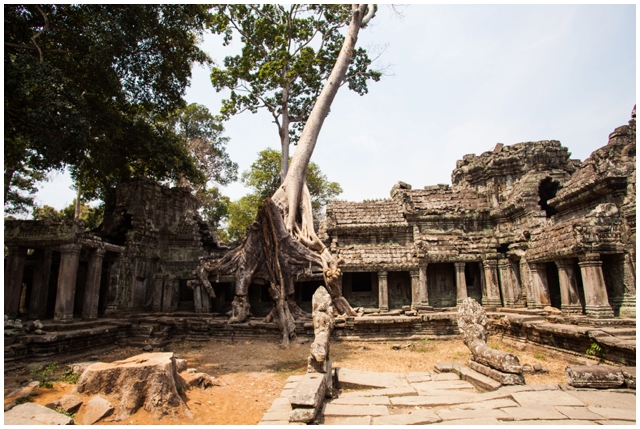 We spent a morning going a little off the usual tourist track and took a rickshaw taxi up to the main local market so we could explore the raw ingredients on offer and just absorb the hustle and bustle of the local market coming’s and going’s. There were row after row of neatly (sometimes not so neatly) parked bikes with the main road strewn with a mix of pedestrians, rickshaw taxi’s and delivery trucks all jostling for position. The main market was set on a loose grid formation with all manner of produce from live chickens to dried locusts and pretty much anything you could imagine in between. The Cambodian people are very friendly and happy to show you things, and despite the obvious language barrier a few points and smiles goes a long way to a memorable exchange. We watched a skilled fisherman divining fresh prawns on a tiny wooden block, walked past all shapes and sizes of green beans and fresh piles of coriander and holy basil and baskets of eggs. 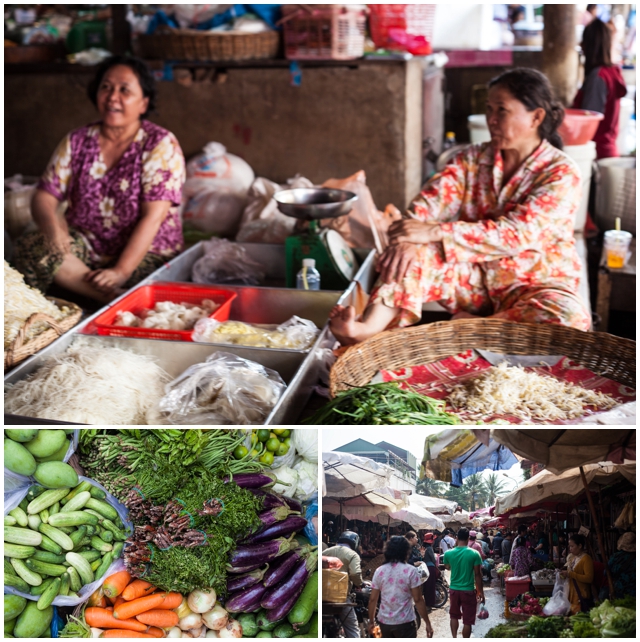 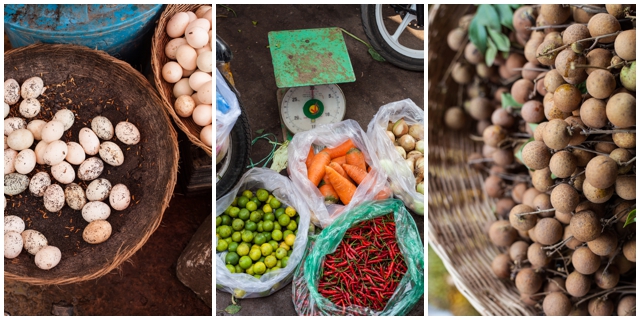 I fell in love with Cambodia. There is so much culture to absorb, the people are incredibly warm and genuine, food is excellent and the mix of markets and countryside make it perfect for lots of exploring to suit all tastes.

I leave you with a shot of our little pool… 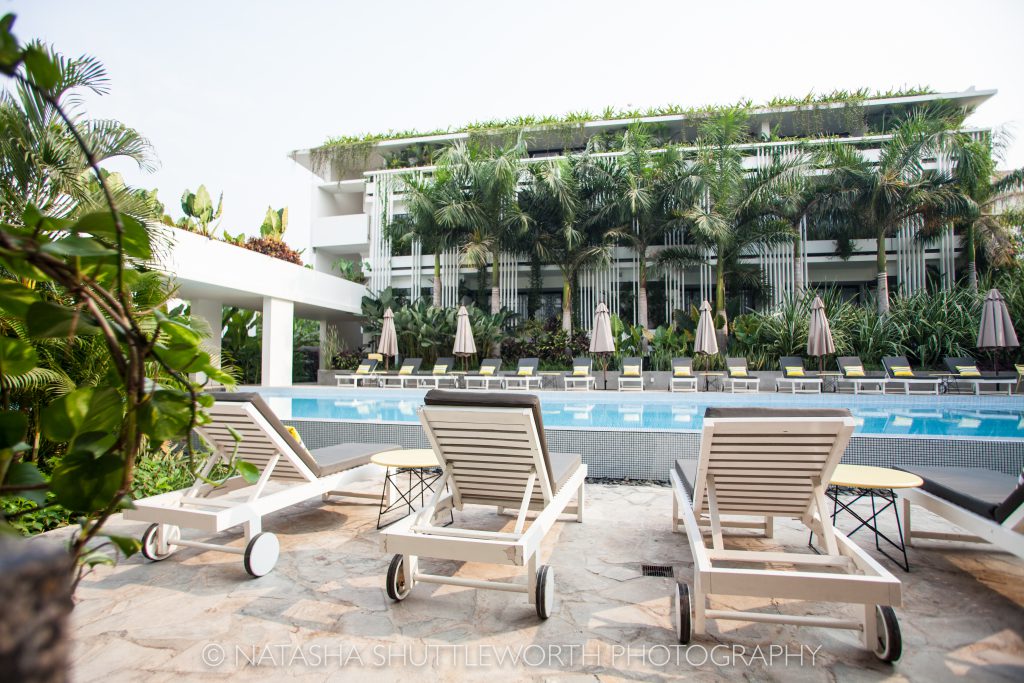 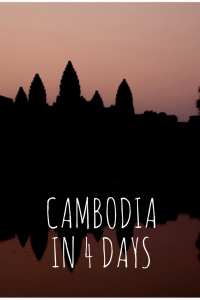