Our Review of Carter’s Steam Fair 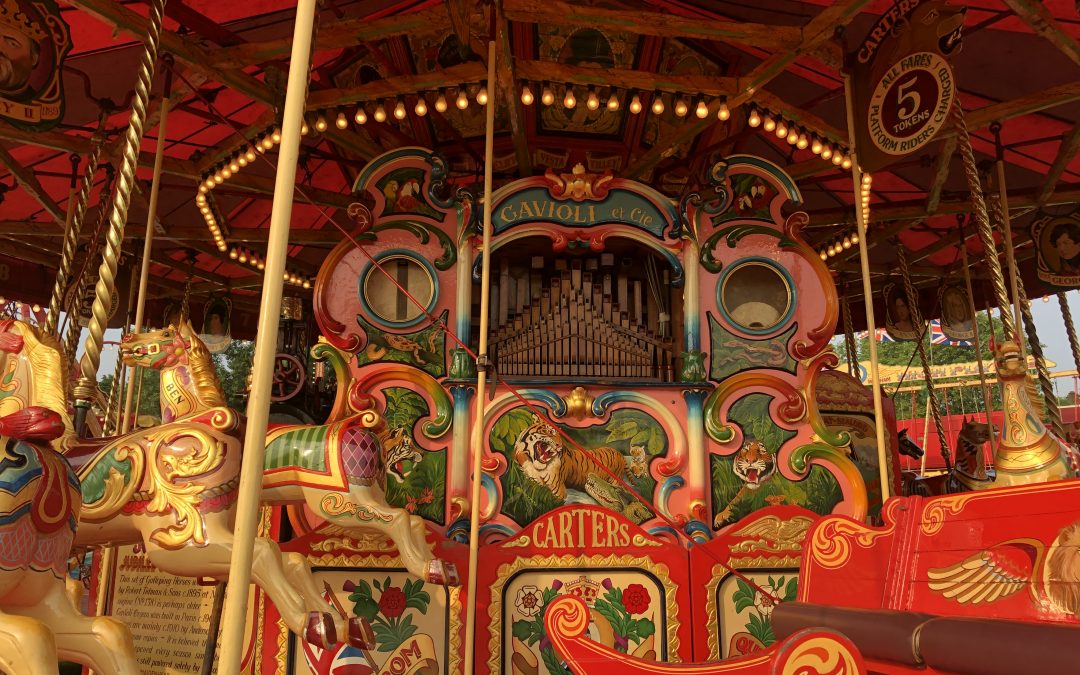 Every year, the fair comes to our local common, and the kids love it. Me, less so … the blaring techno, the lackadaisical staff and the normal, run-of-the-mill rides. After year one, I was bored. However, we’ve recently visited a fair that might just have changed my view of places … 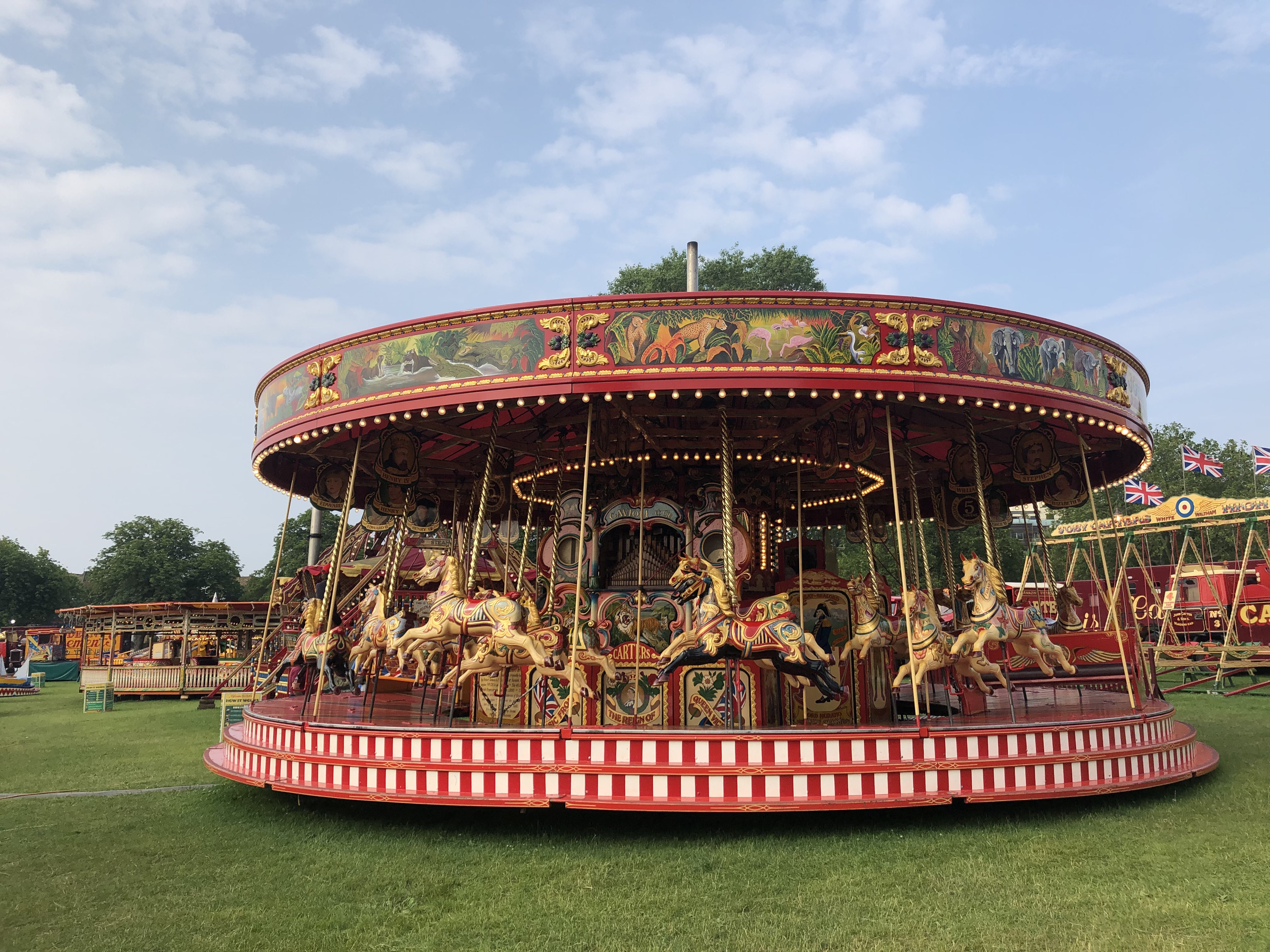 Let me introduce Carter’s Steam Fair, which is not only a fair, but a dose of nostalgia too.

The story began back in 1977 when Jim and Anna Carter bought a collection of vintage rides. After his death, his son Joby took the fair on with many family members still involved, and this is the first thing that strikes you as you walk into the fair – it’s a family atmosphere and it’s a project of passion for all those working there.

Let’s start with the aesthetics: The place is Instagram heaven! Each vintage ride is lovingly restored and painted with distinctive signage and traditional fairground decorations. Expect to be greeted with riotous colour as soon as you enter the fair. 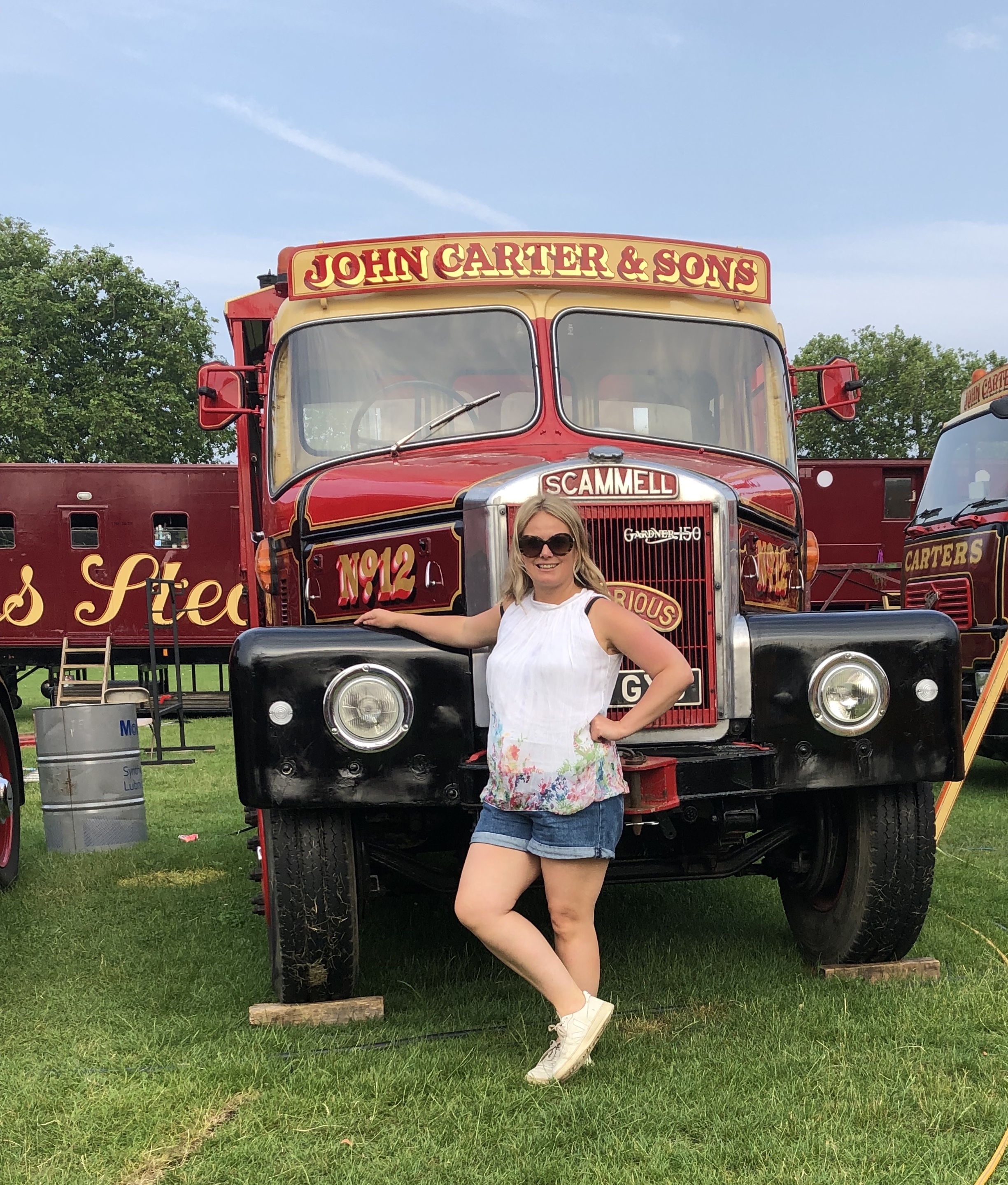 Now, the rides themselves. The collection dates from 1890s to the 1960s. But, please don’t think that old means boring, these rides contain plenty of thrills and nail biting moments.

For the thrill seekers, there is the Steam Yachts, powered by, you guessed it, steam, these were the pre cursor to the pirate ship, as you are swung to a near vertical position. There are also the whirl Around twist, where you hurtle towards the nearby carriage and at the last moment zoom off the other way. For the more sedate rides, there are the beautifully restored merry go rounds with boats, cars and horses to choose from.

Of course, it’s not a fair without the Chair o plane, a horses merry-go-round or the Skid which is very similar to the waltzers. They all appear here. 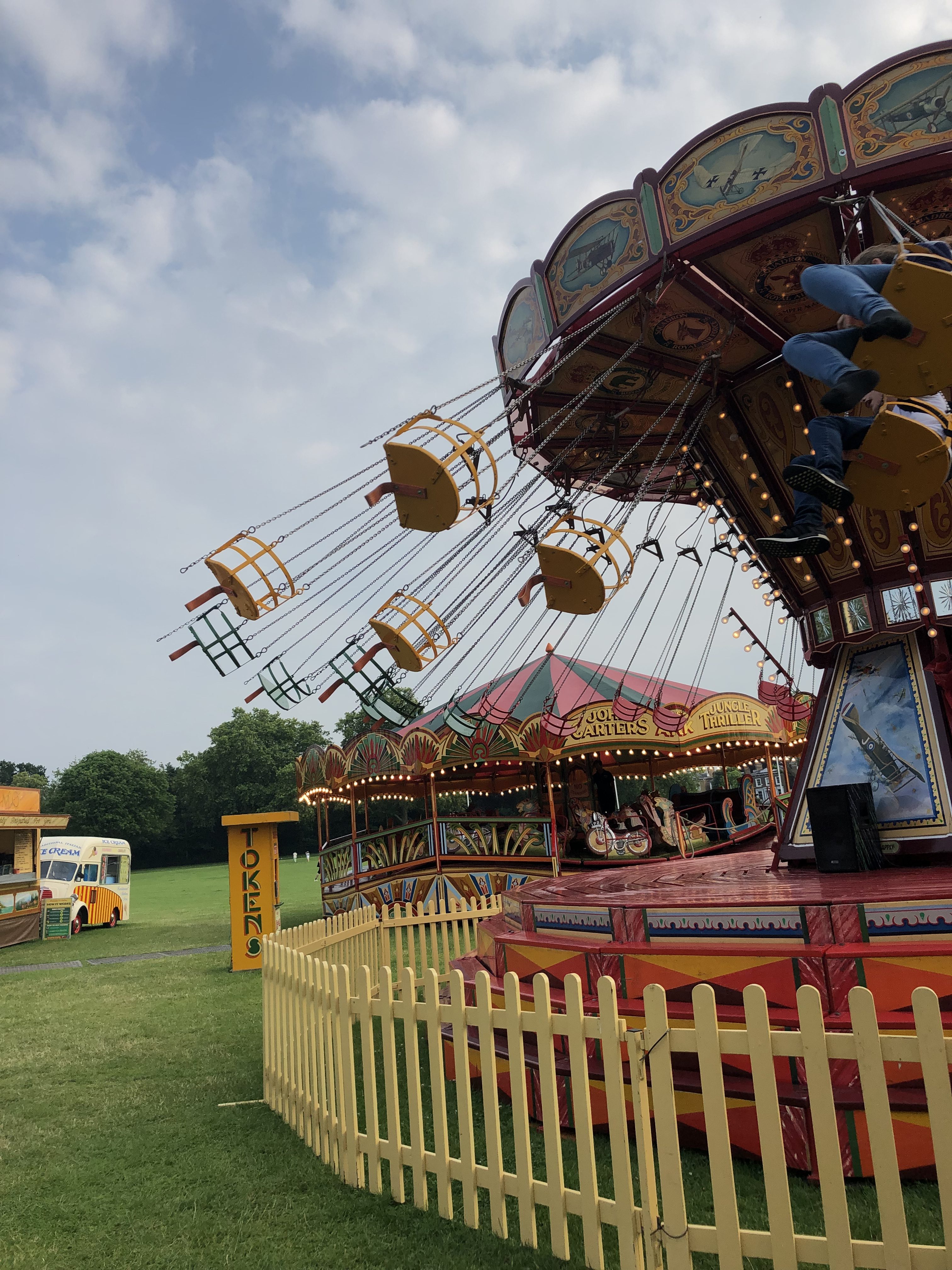 Sadly, the evening we went, my son wasn’t well so we only tried out a selection that wouldn’t make him feel ill. However, that didn’t stop our fun! We loved the swing boats, even if he moaned at me for not putting in as much effort as him and we can both confirm that the Ghost Train is the scariest we’ve ever been on … (my son missed a bit as he had his eyes closed for some of it!!). 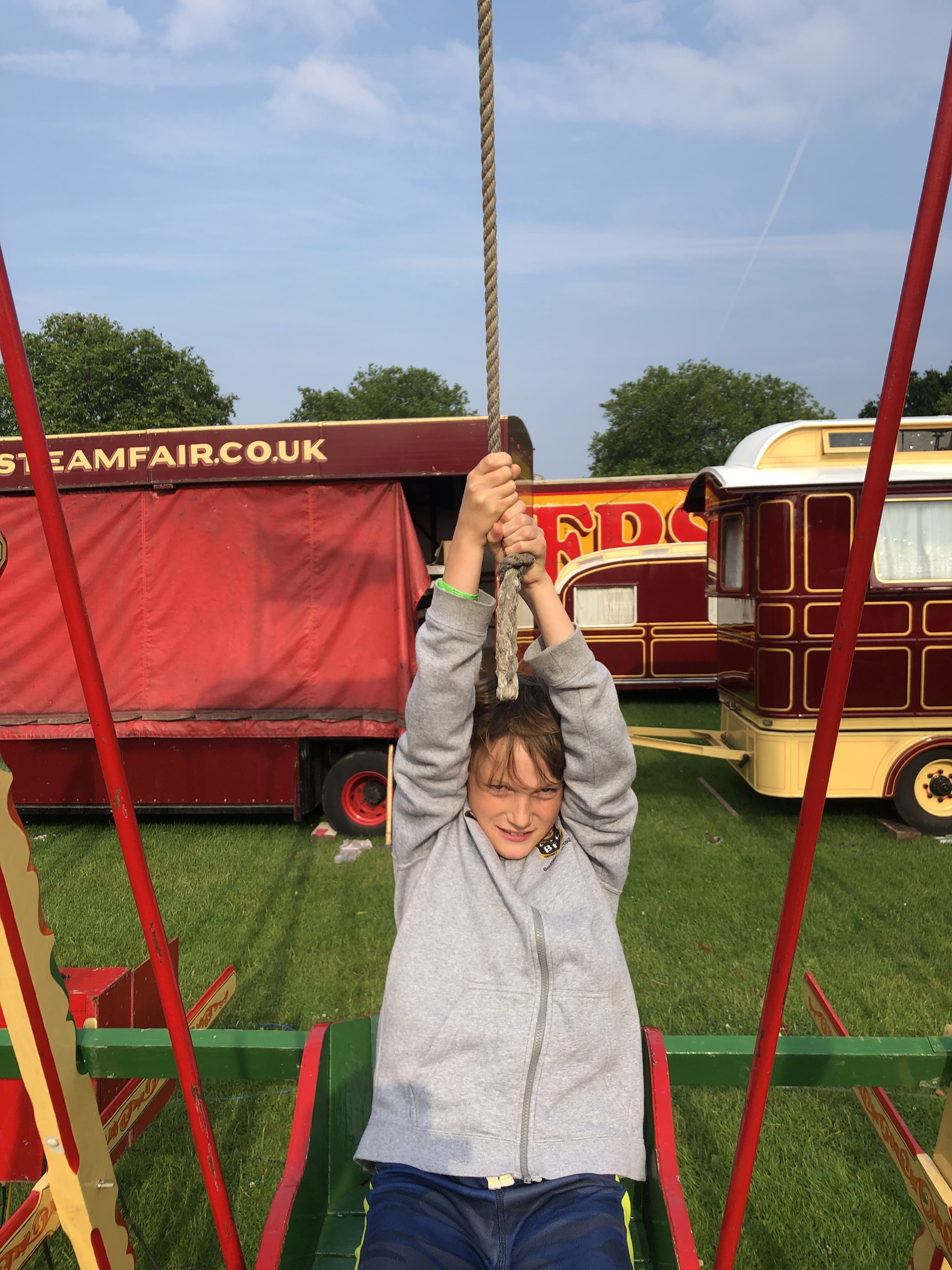 Added to this, there are plenty of traditional games to play: Think coconut shy, the strikers (get that bell to ring) and good old hook a duck. 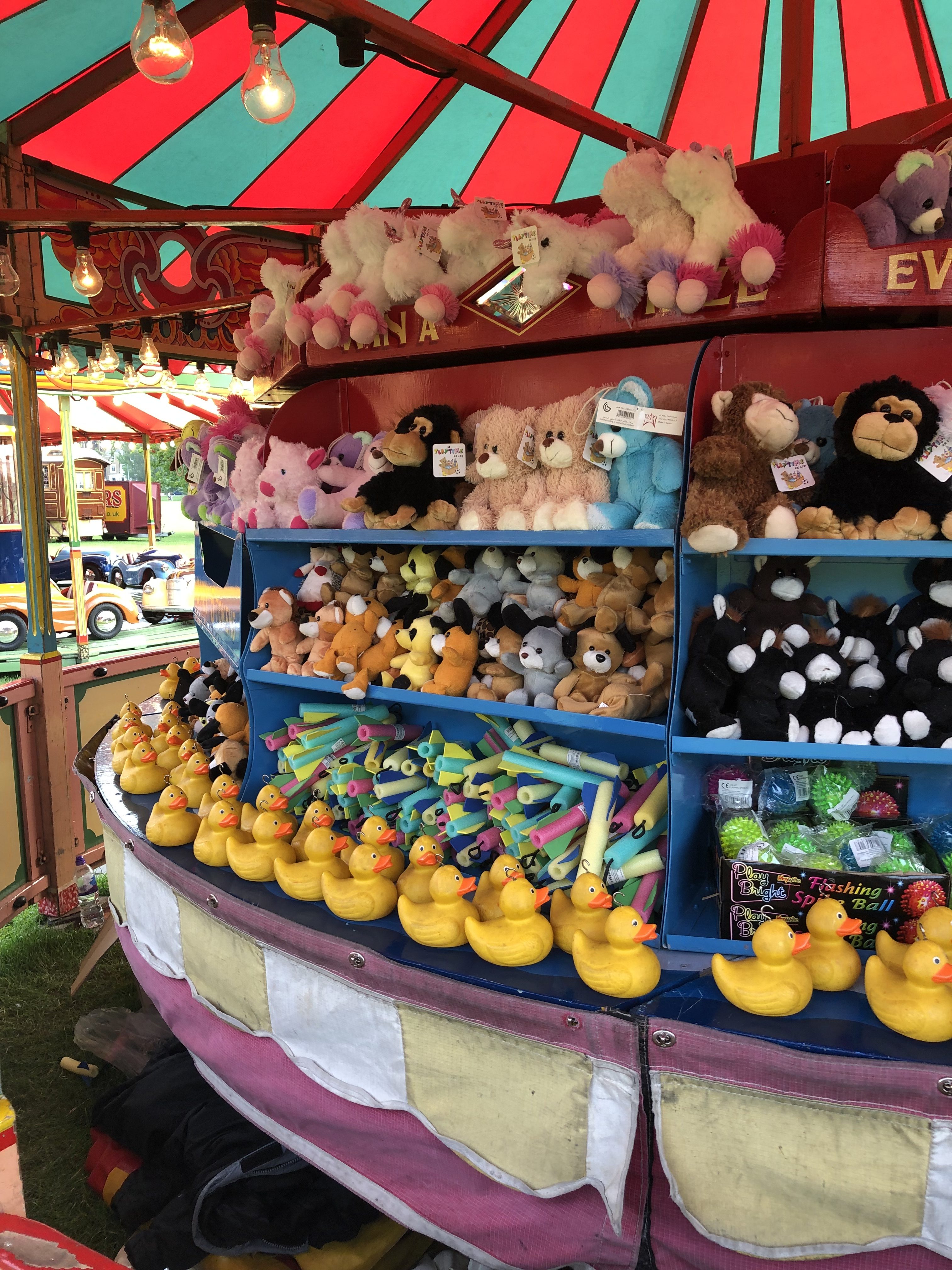 And the last thing to mention, is that the soundtrack is not that awful, blaring modern stuff (just turned into my parents there …), it’s a rock and roll soundtrack, think Love is Strange, Suspicious Minds and that piped organ fairground music!

In short, you are not just there for the rides, but the smell of the steam, the sounds of yesteryear and reliving the beautiful heritage of the British fairground.

The fair is travelling around the country this summer – see the below image for dates. 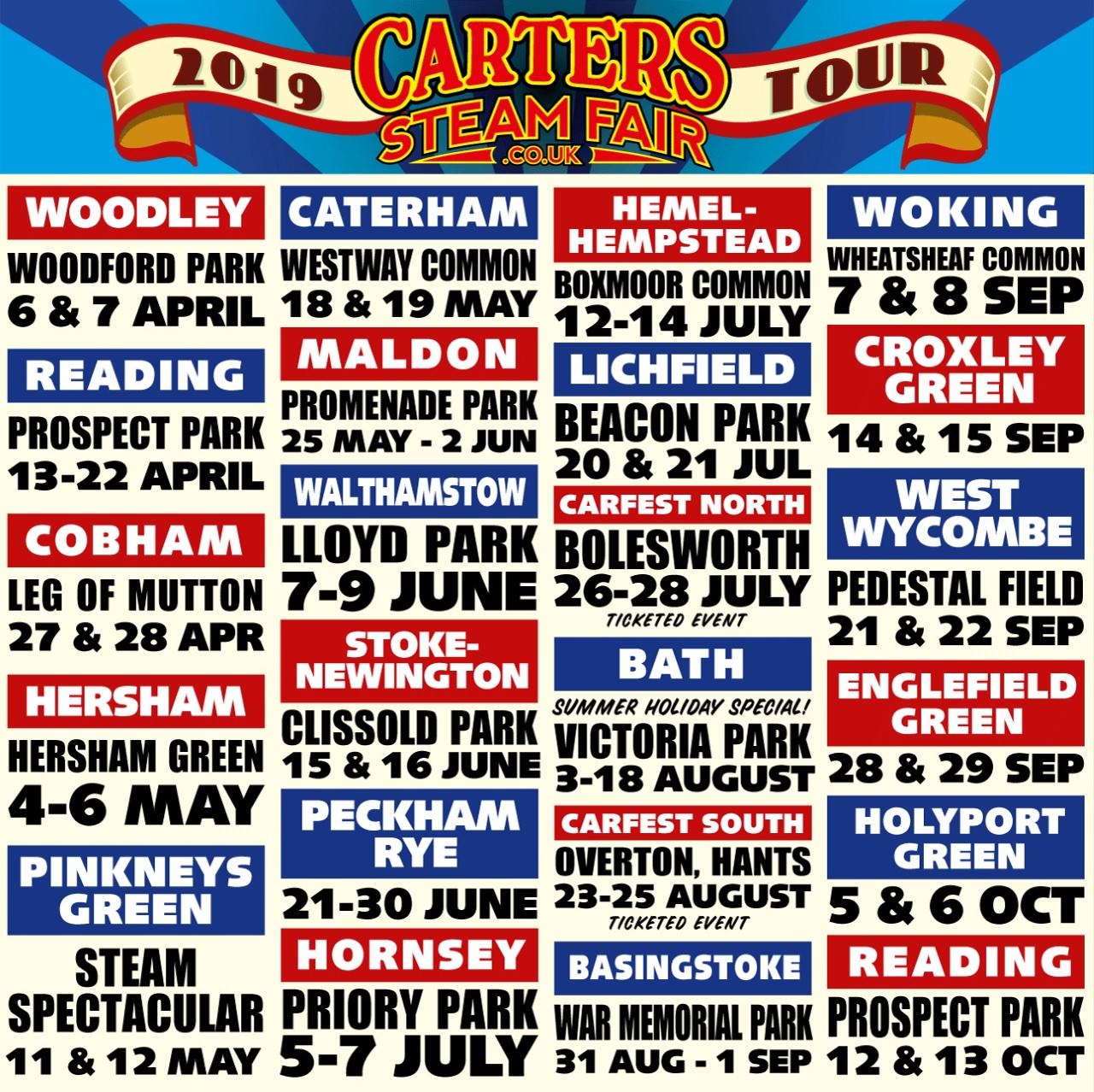 It is free to enter, but you need tokens for the rides and side stalls. If you buy in advance, you will get some free rides!. You need 4,5,6 tokens, depending on the attraction. Each token is 50p. There are family-friendly bundles from £20.

There is quite often a free firework show at most locations – check the website for details.

For more information on the incredible story and work Carter’s Steam Fair do – check out their website.

We were given complimentary tokens to enjoy the fair, but all opinions and most photos are my own, any that are not mine are from Carter’s who gave me their permission to use