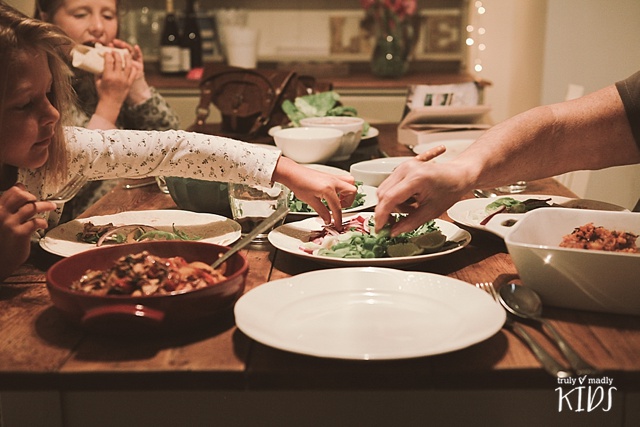 I don’t often get to the end of the school holidays and feel sad that the girls are going back to school. To be honest, we’ve normally all had enough of each other by now but this year, I’ve got some genuine regrets. It was a different story a few weeks ago. Firstly, I’d forgotten how much they eat. It felt like I was hearing “What’s for lunch/dinner/snack/I’m hungry” every five minutes. Secondly, I’d also somehow not noticed that they were eating such a narrow range of foods.

During term time, I have to admit that I’ve been making the same meals over and over again, to make sure that they actually eat a fairly balanced meal. They do both have school dinners, but I’m not sure that the eating of vegetables is strictly enforced, so I’ve been making quick tried and tested recipes week in, week out. I’m bored and they’re bored.

We’ve been here before. Last winter, my husband took a week off work to cook with and for the kids, to encourage them to eat more adventurously. He’s a chef and I love cooking and we spent that week eating our way round the world, trying the food from a different country every night. We dined like kings and the kids loved helping prepare the meals and trying new things. You can read the full story here. But somehow we’ve slipped back into the same old rut.

So as we headed off to France last week for a late camping trip, we decided once again, that not only would it be a week of trying new things, it would also be a week of healthy eating for the whole family.

We had a few simple rules for the week:

1. Everyone has to help prepare the food, even if it’s just laying the table.

2. Everyone has to try everything properly (as opposed to trying a microscopic amount and saying yuk, I don’t like it, before even finishing chewing).

3. There is nothing else to eat between meals, apart from fruit and the occasional holiday ice-cream.

And so it began. We went pretty hardcore on the first day. Various salads for lunch, some homemade bread and a little cheese. Obviously the bread went first. Faced with a plate of salads, the girls did try everything and then hit on the idea of using the salad leaves as wraps, stuffed with cheese, grated carrot and sweetcorn. Win!

On the whole, the week was a great success. They didn’t like everything and we weren’t expecting them to, but they did try all of the food properly and were reaching for salads themselves at each meal. It helped that they were hungrier than usual, biking and swimming all day long, and we made sure (after the brutal first day) that every meal contained something they really liked and that new foods were served simply but with additional ingredients they like (we made yummy garlic and herb sauces for fish, for example).

What we really worked on was helping them tackle the whole plate together so that they could learn to enjoy the meal as a complete combination of flavours. Nothing makes my heart sink more that when they eat their favourite foods first, and are then left with a pile of cold vegetables. At first, we put put together forkfuls of food, with a little of everything on there, so that they could see how all of the flavours and textures work together. This was perhaps our biggest success.

We’re continuing the good work at home now. As we got stuck into lettuce wrap fajitas last night, I was really pleased to see the girls both adding raw onion, salad and herbs to their wraps “because it makes it taste nicer”. I should also point out that our girls are 6 and 9 – they are of an age where they can be reasoned with, so I realise that our little experiment might not work for everyone, particularly for those families with younger kids and toddlers. But small changes can lead to big changes. I really wish we’d started this a lot earlier.

I’ll be reporting back with recipes and news from the front line over the coming days. Next week, here on TMK, we’ll be posting our recipes daily for a whole week and we’ll share our shopping list with you on Thursday, so if you want to, you can cook along with us and report back with your sucesses and top tips.

I leave you with a picture of my little salad eaters.