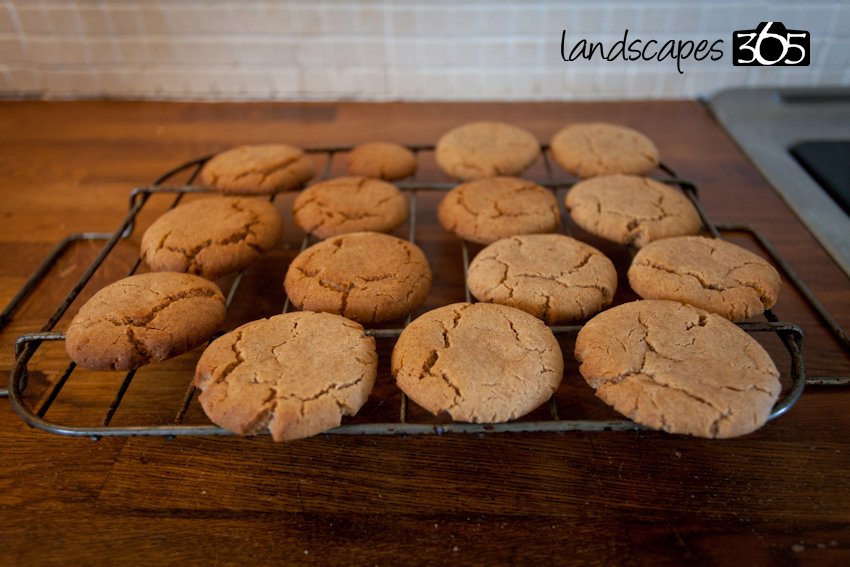 It’s Friday! Aaaaaah. Here’s a lovely recipe that you can make in time for elevenses or after school tonight with the children. Today’s blog is written by guest blogger Andrew Woodhouse of Landscapes Skye whose writing gains him as many followers as his beautiful landscape photography.

I only had friends because of my Mum’s coffee buns. When I was a teenager, still at school but desperate to be grown up and we were all hanging out where no adults we knew could see us smoking we would eventually get bored, cold or wet and decide to go to someone’s. When deciding which house to go to there were the usual criteria to be satisfied

Whose parents were out?

Whose attractive big sister was in?

Who had the best music?

Who had any dirty magazines?

Teenage boys are an unpleasant bunch. But there was another criteria:

Had Woody’s (that’s me) Mum made coffee buns recently?

If there was a fresh supply of coffee buns then there would an avalanche of teenagers into our kitchen and the kettle would go on (A coffee bun was always best eaten after being dunked) then the coffee buns would disappear. In later years it would be an excuse to go visit my parents. The chance to stock up on CBs

“Hi Mum how are  you? Made any coffee buns?”

I would then leave with a bag full of coffee buns and my flat would then become popular (till the buns ran out).

More years went by. Children appeared and wives and life plans changed. Only the coffee buns remained the same. Until my Mum stopped making them. At first I accepted her reasons for doing so. She would say the supermarket was out of some of the ingredients; then she didn’t have time; then the excuses were just mumbled and the subject was changed. I put it down to the upset and stress in her life as my dad had recently died and she was looking to move to a retirement flat. Life was getting a bit lonely and scary. It was then that she forgot how to make a cup of tea. Then she started to forget names. Then she started to have panic attacks.

Soon after she moved into her little flat she was diagnosed with dementia and coffee buns were forgotten about as my Mum made a rapid mental descent. Within a year she had been hospitalised which procured a moved into a care home. A year after that she couldn’t recognise me and soon after that she was in an almost vegetative state. For too long she lay like that until February last year when she finally died.

I inherited her notebook with her recipes in it. Included was one entitled “Coffee Buns.” I’ve never baked before but the family are keen on The Great British Bake Off and the children and Mrs L365 enjoy baking all sorts of stuff so I was inspired to get the recipe out and gave it a go. 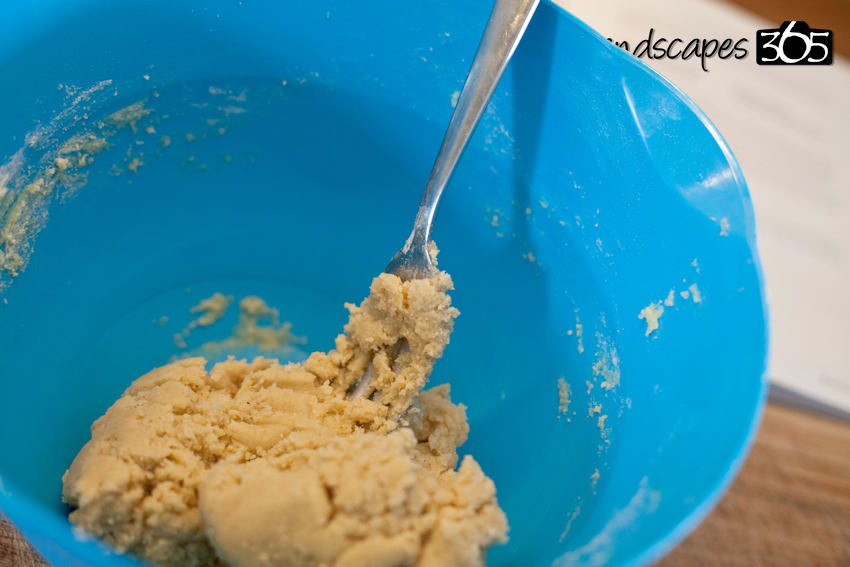 The minute I started I became really emotional. I was connecting with my lost mother and my lost past. I only see one of the little gang of friends now. It’s handy that he is the husband of Mrs L365’s best friend. The rest of us have drifted apart or fallen out. While I was mixing the ingredients I thought off past times and fretted about what I would do if the buns came out wrong. Would that tarnish my memories? What if they buns turned out right? Would I turn into a blubbering wreck? Well, they turned out just right and I was a blubbering wreck.

They didn’t look like my Mum’s coffee buns but they tasted just right. I hadn’t been confident in shaping them by hand so I had used a cutter.

Huge waves of conflicting emotions crashed over me. I missed my Mum, I missed my Dad, I missed our dog who always got the last bit of the bun. I missed the friends I had then. I remembered the petty jealousies and peer pressure that make your teenage years such a roller coaster ride. The sudden changes in allegiances, who is cool who is not, who is “in” who is “out.”  The desperate urge to stay in and the bewildered bafflement of being out. This and equally clueless discussions about girls took place with friends over a cup of tea and coffee buns.

Hopefully, I will soon be able to dunk one in my tea or coffee without bursting into tears. Isn’t it amazing how a biscuit can stir such emotion? Yesterday, my post dunked cup of tea was the best I have tasted in 8 years. It had the ginger and cinnamon edge to it that a cup always used to have and was overflowing with memories and emotion. I was sitting at my desk looking over the top of my screen at Mrs L365 while holding a half eaten biscuit with tears streaming down my face. I still don’t know if I’m happy or sad… I do know that this morning I made more. I was more confident and hand shaped them. The little shiver of excitement when I remembered the ones on my Mum’s baking tray looking just the same before they went in the oven. The sense of achievement when they came out looking just as they had years ago was overwhelming. They turned out exactly as my mother had made them. 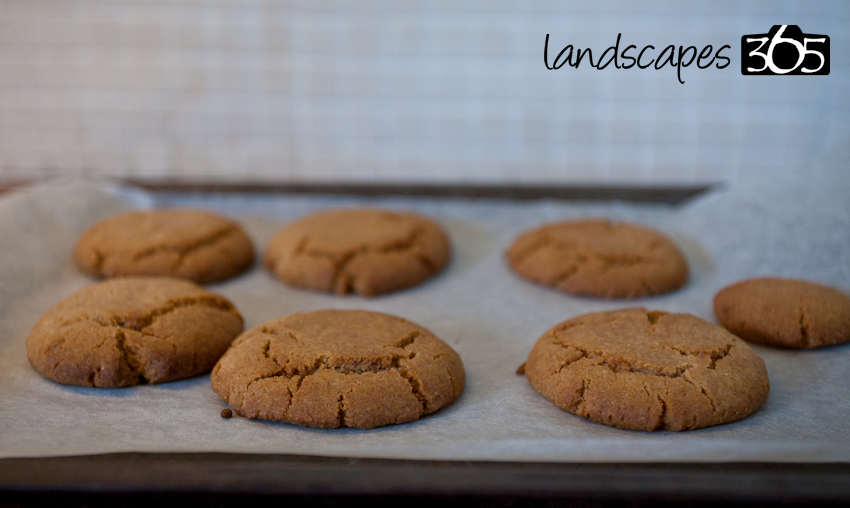 What was even better was that our son had friends over and they all wanted to try one, then another and another. I now know how my Mum felt. She would make herself some lovely biscuits and the bloody kids would eat them all. 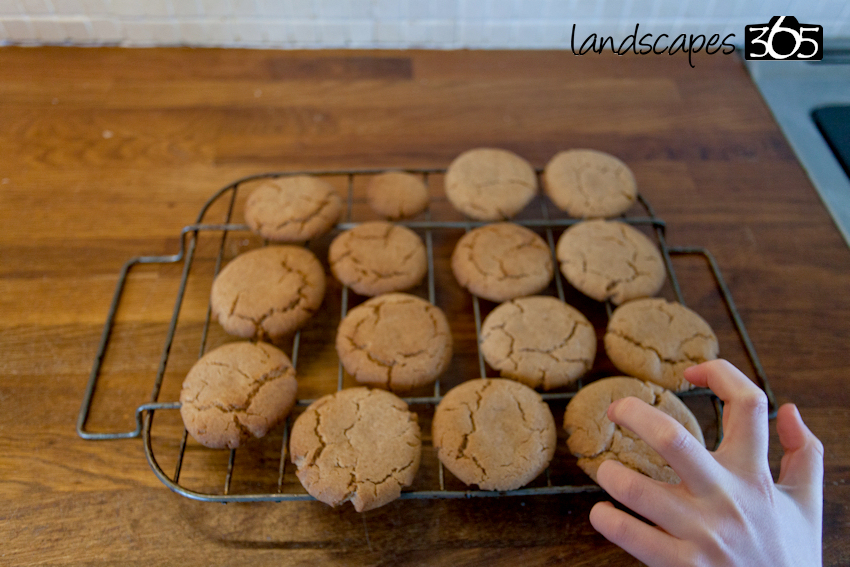 Bake in oven pre heated to 180c for 15 mins till golden brown.