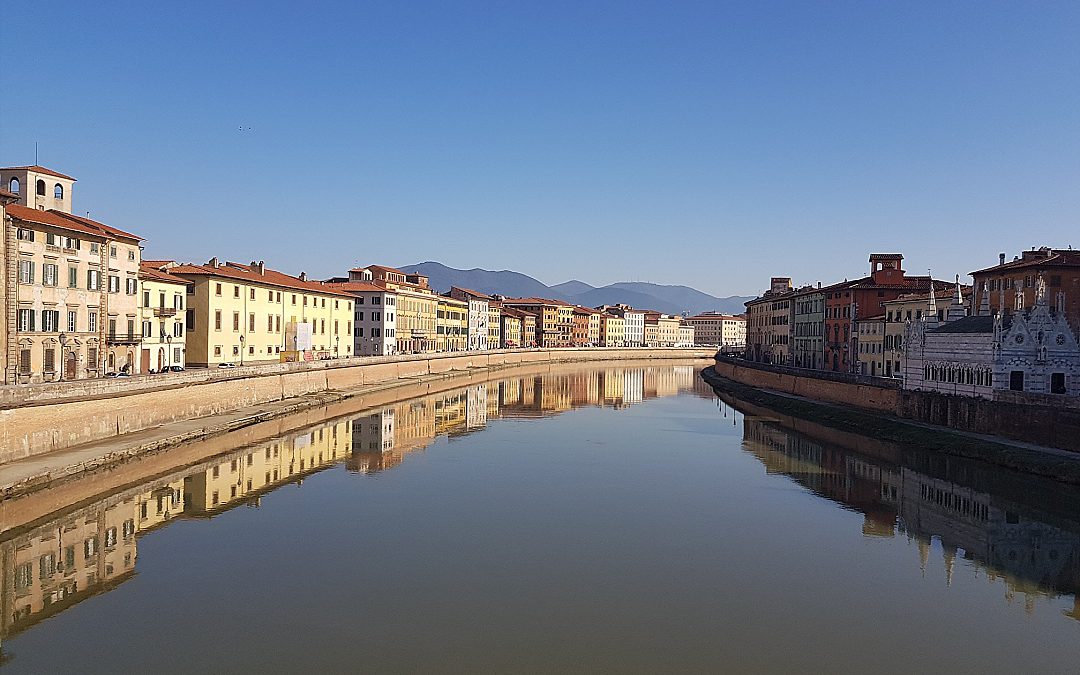 Here at Truly Madly Kids we love and adore our children. We also love to escape from them every now and then which is why, knowing my other half had his ‘big’ birthday this year, I decided to book him a surprise getaway to Italy – Florence and Pisa to be exact. Not being able to hold my own water though, I told him a couple of weeks after I’d booked it so that we’d both be excited for 8 months.

We started to learn Italian via the Duolingo free app (Android and Apple), with David being far more dedicated than me and never losing his streak. There are hundreds of words we now know, trying to string them together to form sentences is a little more tricky though.

Planning is something we take very seriously on our holidays with the children, but when it’s just the two of us we just love to wander aimlessly to just see what happens and see where we end up.

We flew from Manchester to Pisa with Easyjet for just £60 return each, we can’t get to London from the Northwest on a train for that! A short walk from the airport (5 minutes) and we arrived at the PisaMover, a driverless train that took us to Pisa Centrale station in just under 10 minutes (€5.40 for a return trip). If you are staying in Pisa then you’re right here, with taxis outside to drive you a short distance to the centre or, if you haven’t got much luggage, take a stroll. The ticket office at Pisa were very helpful and easily guided us through buying tickets to Florence (€16 each for return tickets). A few minutes later, with the gods of perfect timing on our side, we boarded a luxurious double-decker train that powered through the Tuscan countryside and had us in Florence in an hour.

Thanks to Google Maps we walked to our hotel, in about 8 minutes through narrow streets and cobbled roads bursting with 100’s of years of architecture. I booked the Ginori Garden Al Duomo through Booking.com and paid close to £100 per night for our room. The location was perfect, 150 yards from the Duomo (Florence Cathedral) and a brilliant base to explore the magnificent city. Our room had a Fresco painted on the ceiling, a mini bar, super comfy bed and a multi-coloured LED shower head which amused us greatly. (I didn’t think through turning off the bathroom light so that I could have a disco in the dark. What happens when I turn off the shower, the disco lights stops and I’m left in the pitch black, soaking wet and risking life and limb to get to the light switch? I made it, but only just. Keep i mind that this hotel doesn’t have a lift, we were on the second floor but if you have luggage there is a porter willing to help. 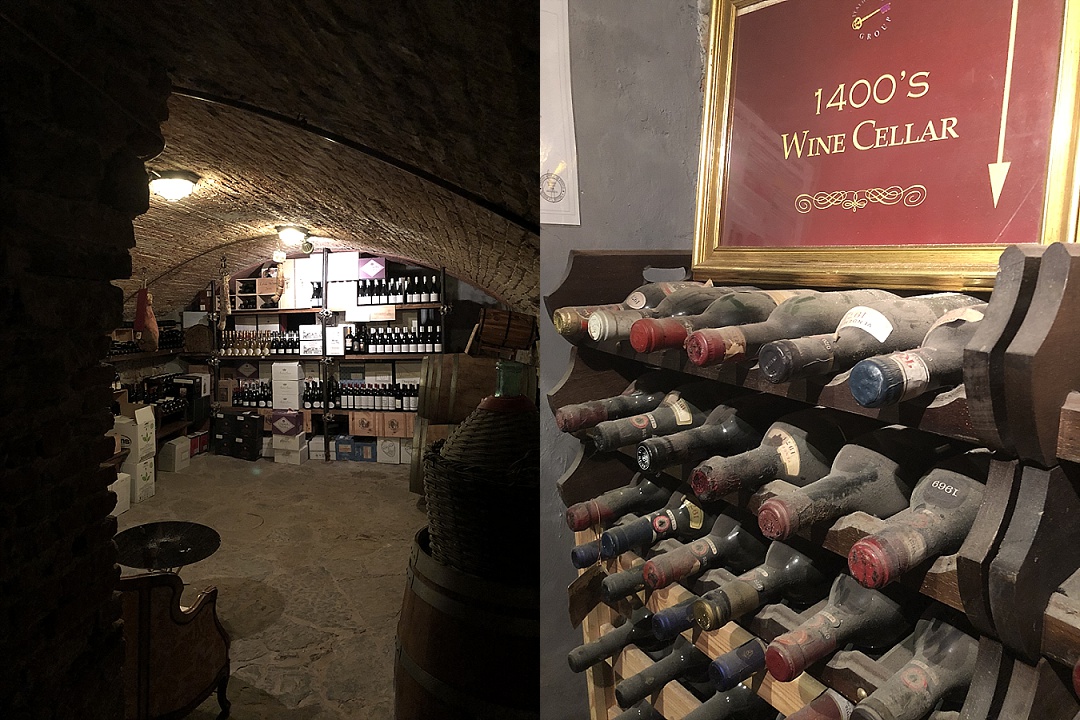 All weekend we would alternatively ‘oo’ and ‘ah’ at the various structures and every time we walked into the Piazza del Duomo, we were just in awe of the magnificent cathedral and the surrounding buildings. Designed at the end of the 13th century by Arnolfo di Cambio with the dome being added 200 years later by Fillipo Brunelleschi. It’s difficult to miss and, if you’re ok with queuing for a while, I’m sure it is just as astounding on the inside. We, on the other hand, were fine with just taking in the façade and, of course, people watching. 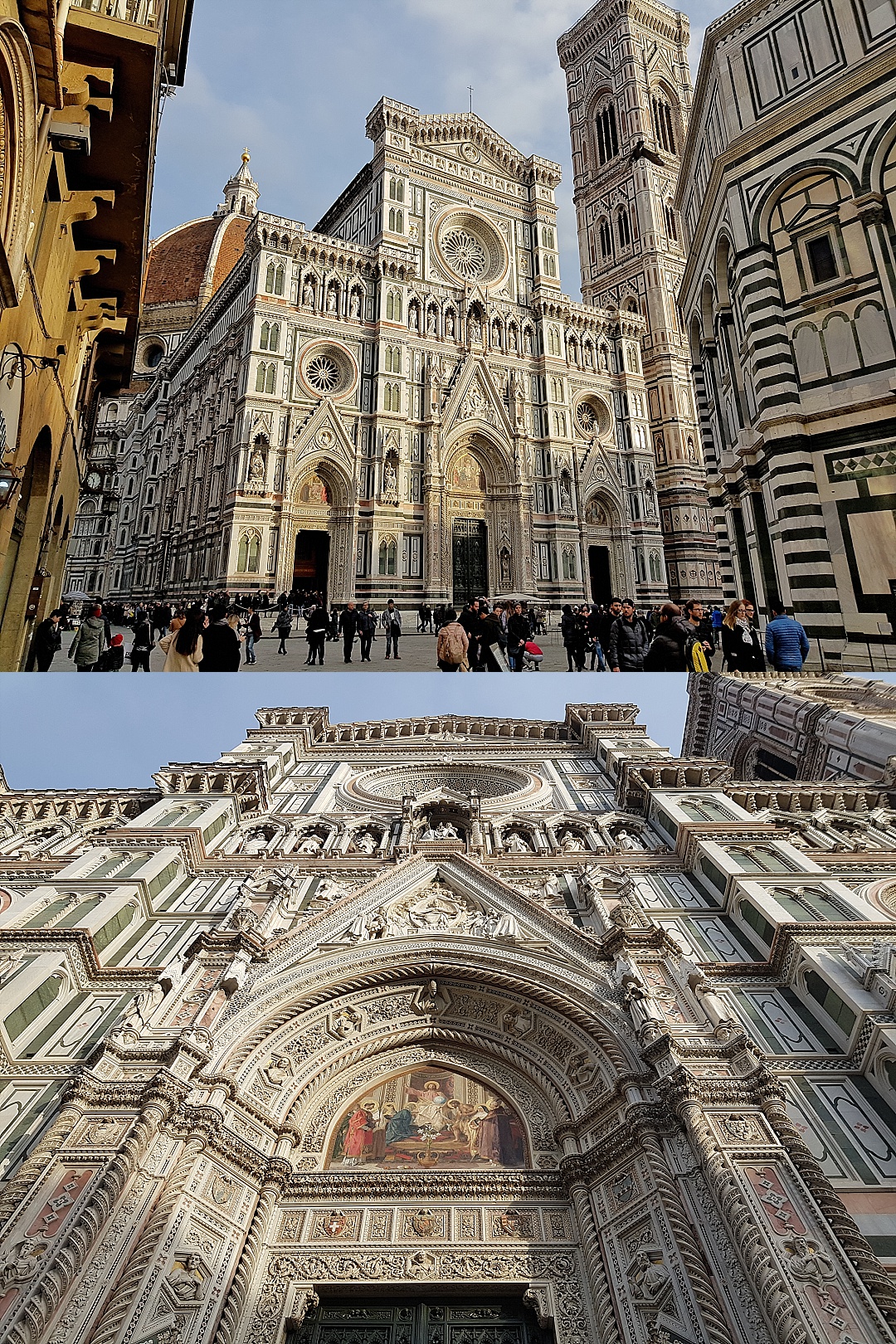 Next, we ventured to Ponte Vecchio (Old Bridge). The bridge spans the River Arno at its narrowest point and was built in Roman times. It has always been a place for merchants to sell their wares and today is no different as it’s crammed with very expensive jewellery shops. I was pretty underwhelmed with it if the truth be told, I’m not quite sure what I was expecting really, it was a bridge, but all the other tourists were happy taking selfies and seemingly loving it so who am I to question their source of happiness. 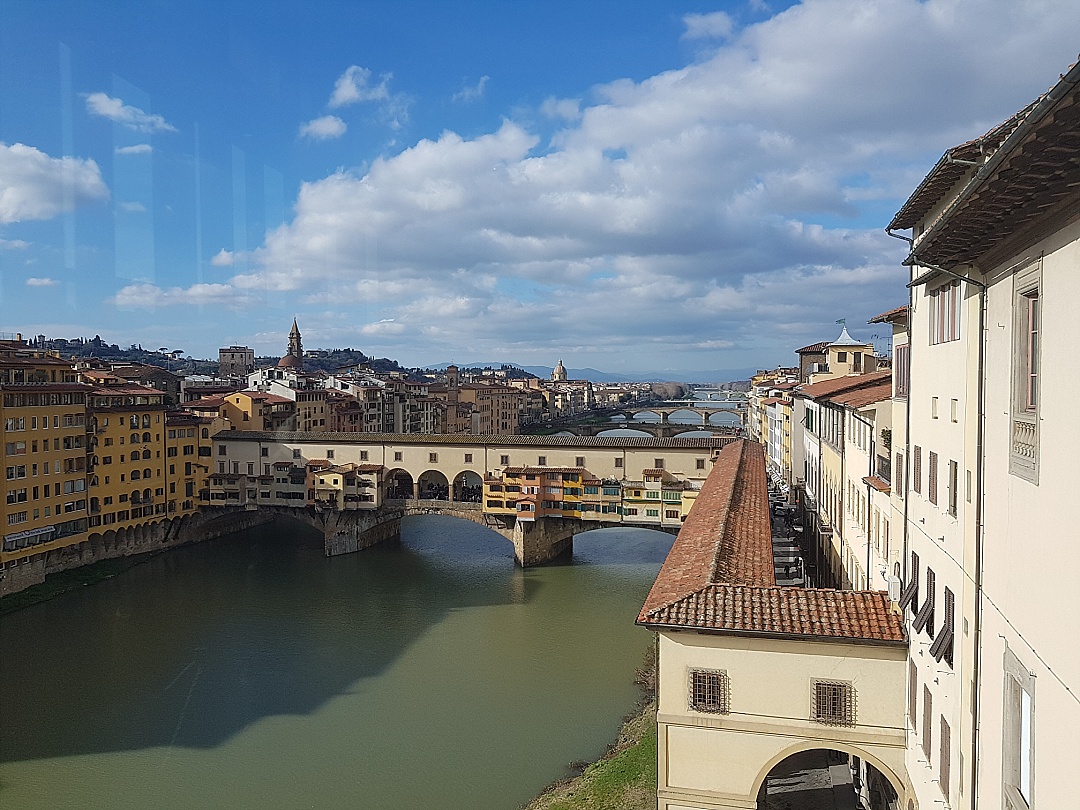 After crossing the bridge, a few minutes walk led us to the Palazzo Pitti (Pitti Palace). First commissioned in the 1400’s by Florentine banker Luca Pitti but then purchased in 1550 by Cosimo Medici and his wife, Eleanor, to be the new symbol of power of the Medici’s reign over Tuscany. Today the palace is divided into 4 museums and the Boboli Gardens (so called because of the hill, Boboli, which it is built on). We wandered around the gardens for a couple of hours, climbing steep steps but being rewarded with hundreds of fountains, statues, twists and turns. With no one around it was very romantic, or it would have been if it hadn’t of been raining and neither of us looked like we’d been dragged through a very wet hedge, backwards. 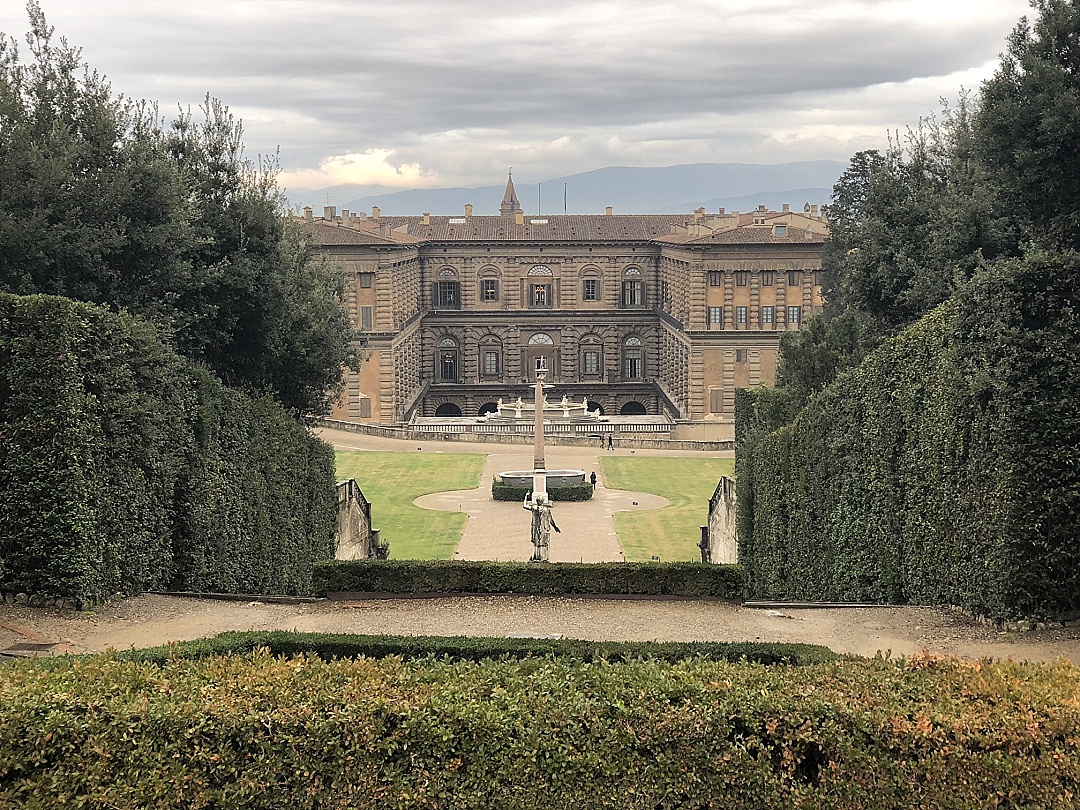 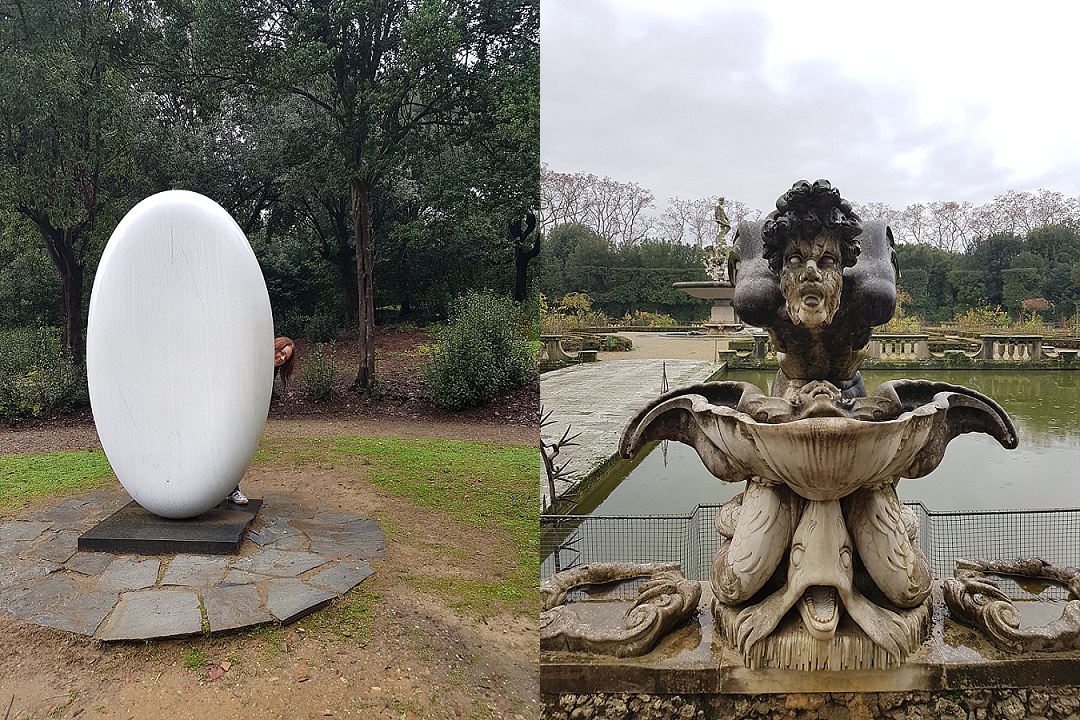 We were already on the right side of the river to go to the Piazza Michelangelo, a vantage point, to view the whole of Florence beneath us and after many, many more steps we were sweaty and drenched but thankful we’d made the effort. What a stunning view from here! We weren’t there for sunset but the reviews online suggest that it is truly a magnificent panorama and also slightly magical.

27000 steps later (12km) we arrived back at our hotel with just enough time to change before our wine tasting in the 15th century wine cellar of our hotel. We shared boards of local charcuterie and cheeses and were taught about the Tuscany region and it’s exceptional  wines. After choosing a couple of bottles we were then left alone, enjoying the vino and each other’s company.

A short time later David made it quite clear that he didn’t want me to be his girlfriend anymore. The diamond ring in his hand and the look of love on his face ensured that of course I said yes! Little did I know that I nearly got proposed to a few times that day but the rain at the palace and the hordes of Japanese tourists with selfie sticks at Michelangelo’s statue kind of didn’t feel right, but that moment, right there, just the two of us, was utterly perfect. 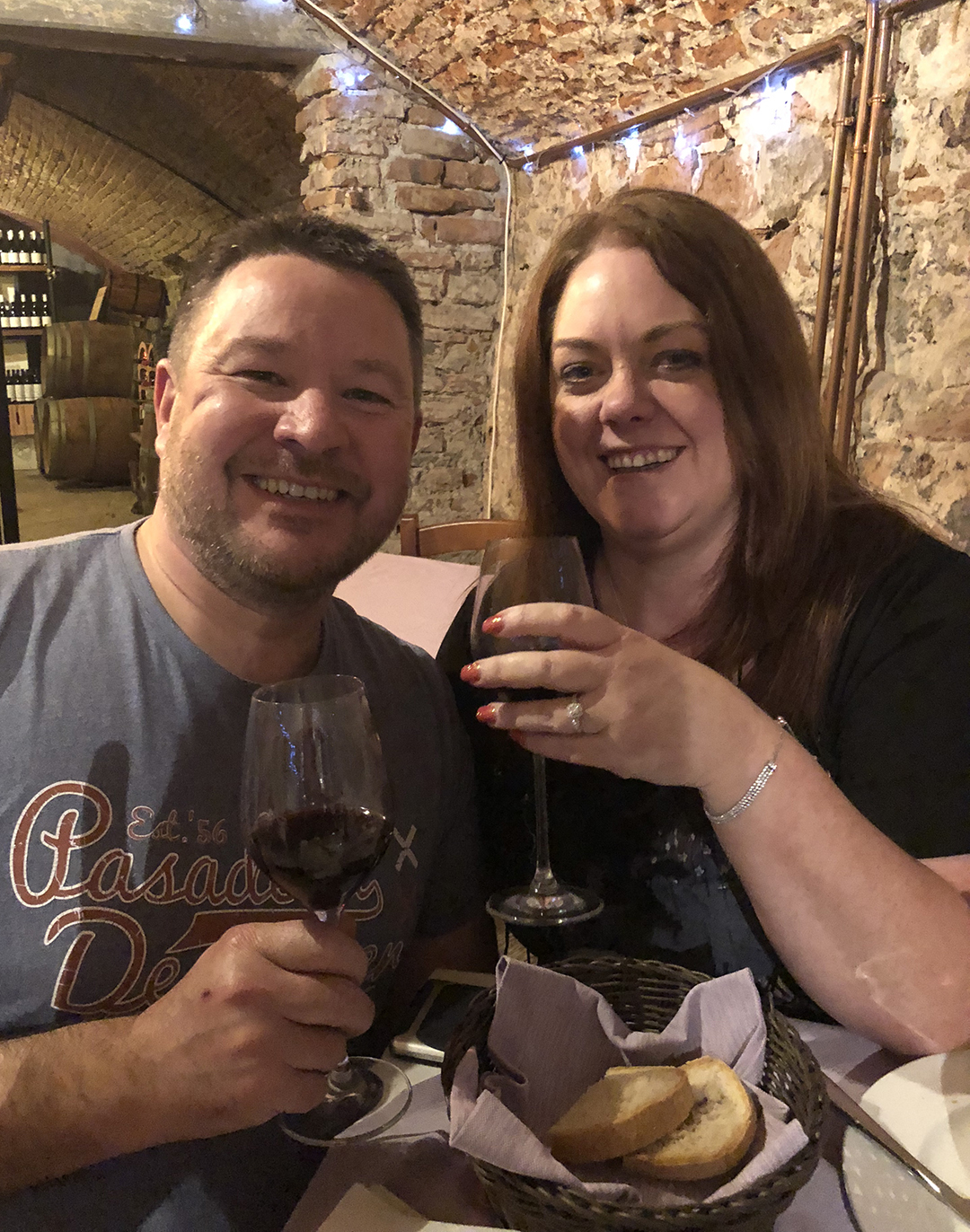 After, more, celebratory drinks in the back streets of Florence we called it a night as we’d planned to visit the Uffizi Gallery the next morning. Built in 1581 the gallery was eventually filled with the entire art collection of the Medici family (at this point the family name was dying out due to lack of heirs) but it was originally intended to be offices and a meeting place for the businessmen of the time. Meanwhile back in 2018, horror stories of a 5 hour queue to get in to said gallery don’t apply on a mid-January winter’s day. It took us about 5 minutes, we paid our €8 each and we were free to roam. If you want to take your time and read about every artistic piece, immersing yourself in centuries of amazing talent, then allow yourselves at least 3 hours. For those that just want to say ‘Been there, seen it,’ then you could probably see the most prominent pieces in under an hour. Botticelli, Da Vinci, Caravaggio are just a selection of all you can see in this tremendous building. A trip to Florence wouldn’t be complete without visiting the Piazza della Signoria (next to the Uffizi Gallery), where you can feast your eyes on the world famous, Michelangelo’s David. 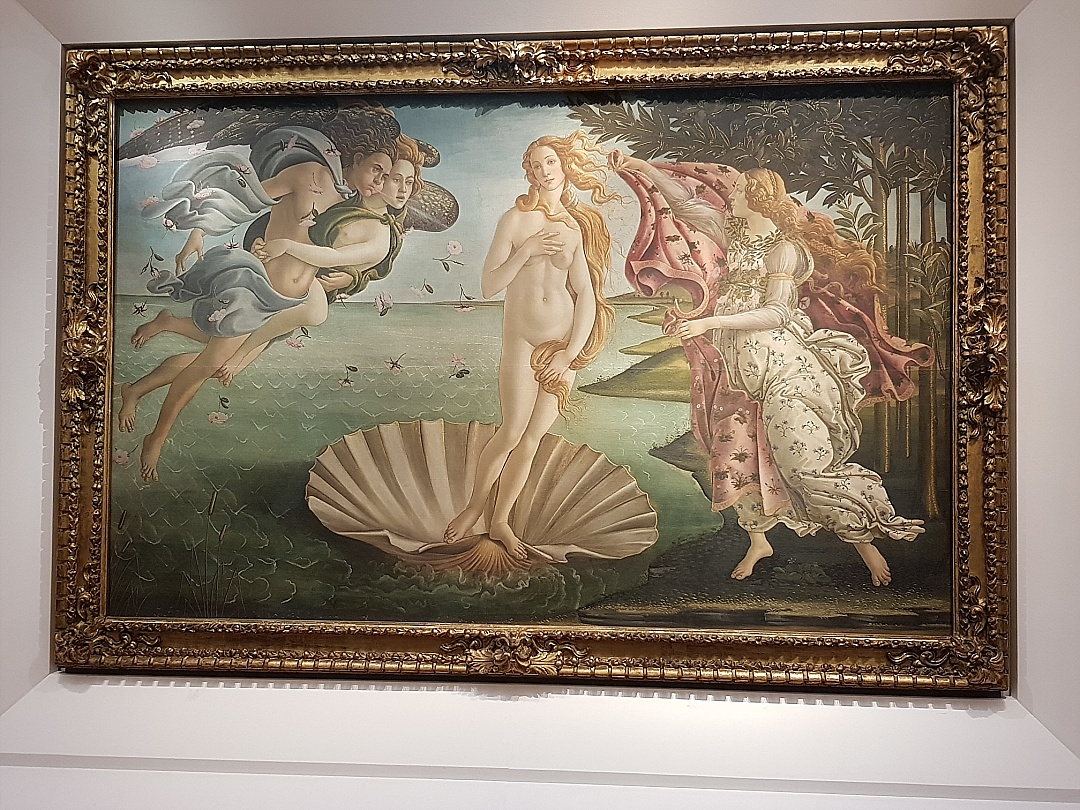 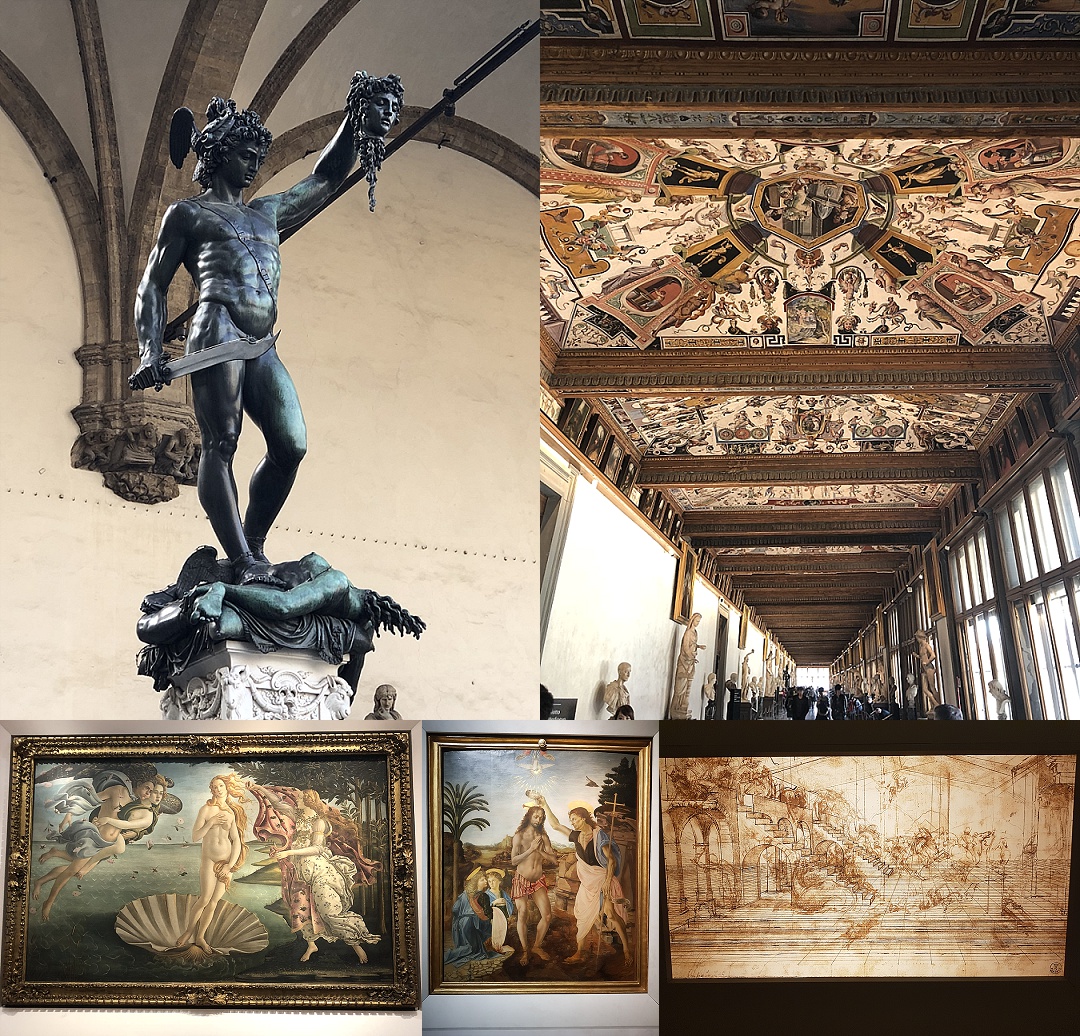 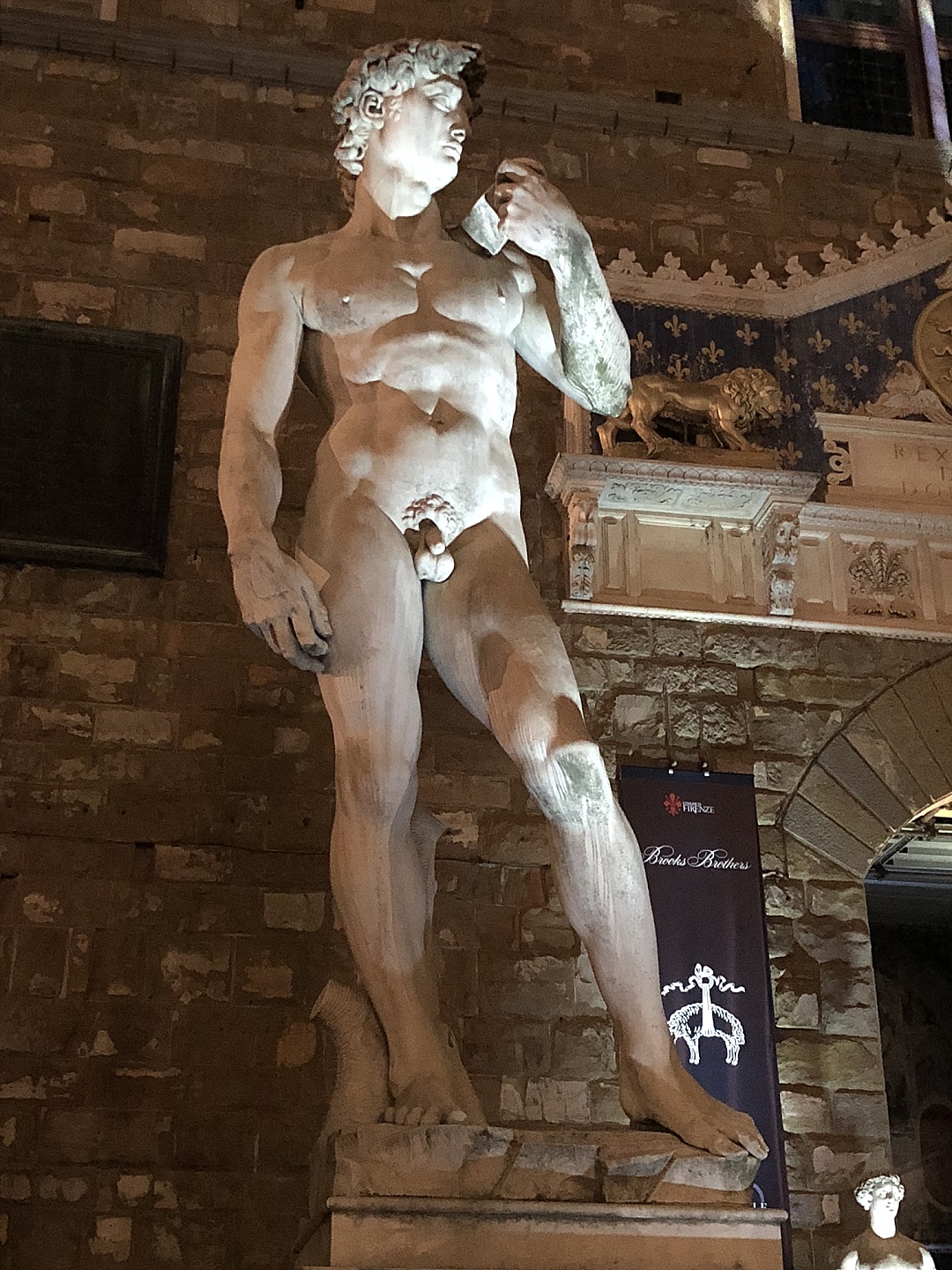 After a hard day sightseeing and soaking up oodles of culture, food glorious food was on our minds. My main goal, food wise, was to try the Bistecca alla Fiorentina with a bottle of Chianti. This is a steak like no other. The restaurants ONLY serve 1.2kg and above, it must be AT LEAST two fingers thick and you must be hungry. Thankfully we decided to share one but the little Japanese man across from us tried to take one on his own. He didn’t win. It’ll set you back approx. €50 for one of these massive steaks. 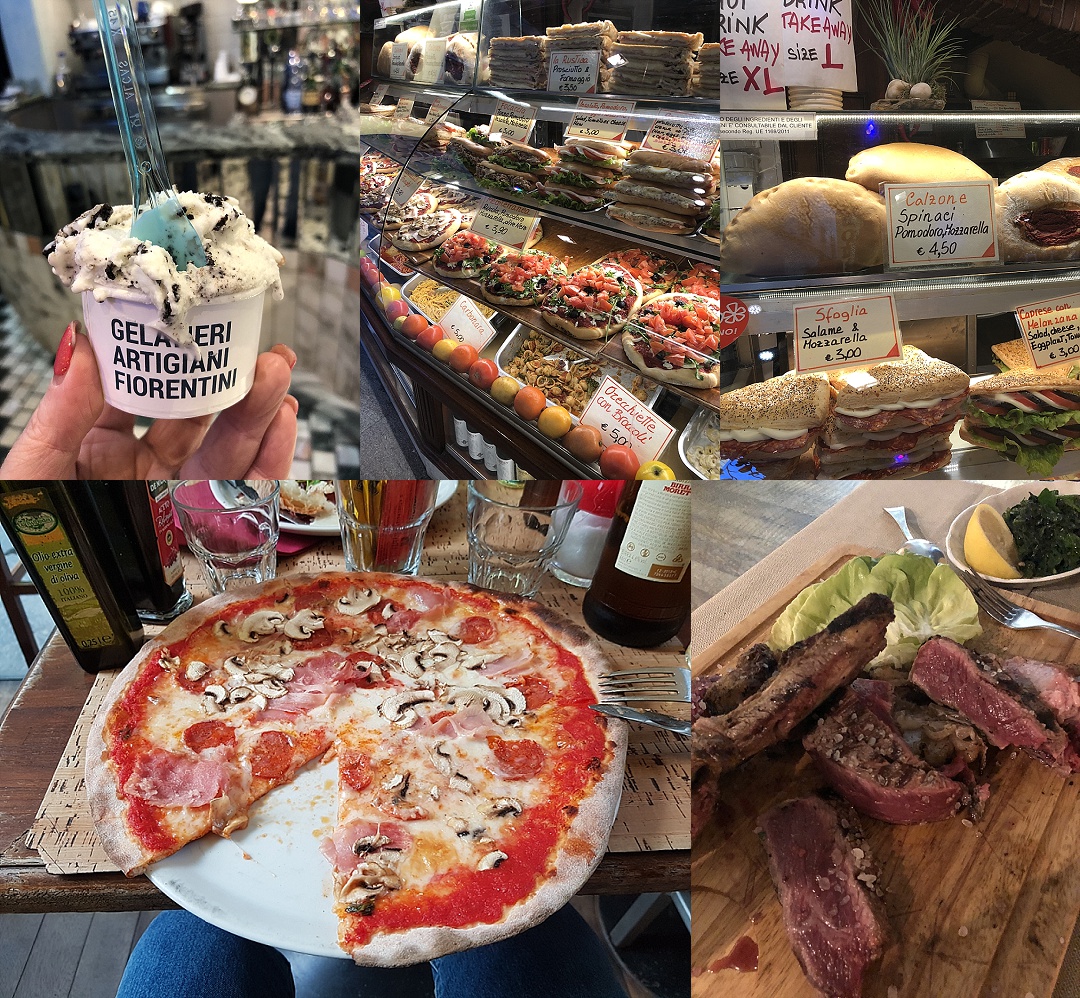 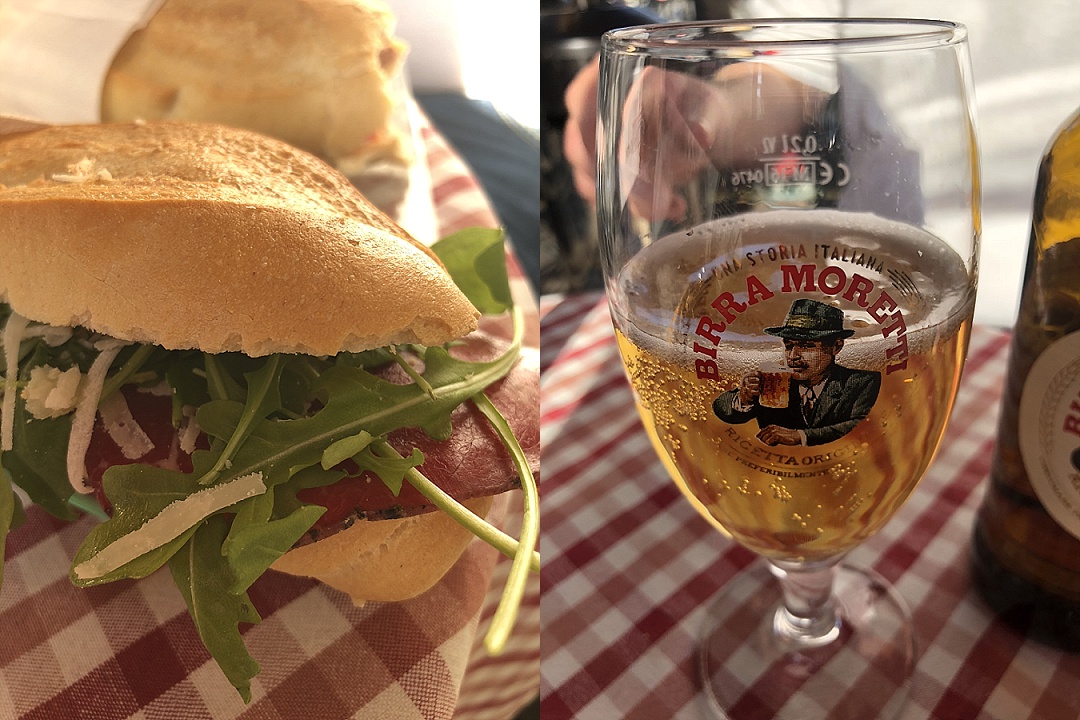 Mercato Centrale is two floors, the bottom being home to a fresh food market which is open until 2pm every day. Upstairs, by contrast, is open until midnight and is filled with a variety of vendors selling all kinds of food and drink, street food but inside. Grab your friends, a table and while away the hours sampling Tuscan delights. The byproduct of Florence selling so much meat is that there are streets after streets of leather goods stalls surrounding this market, some you can haggle with, some you can’t. 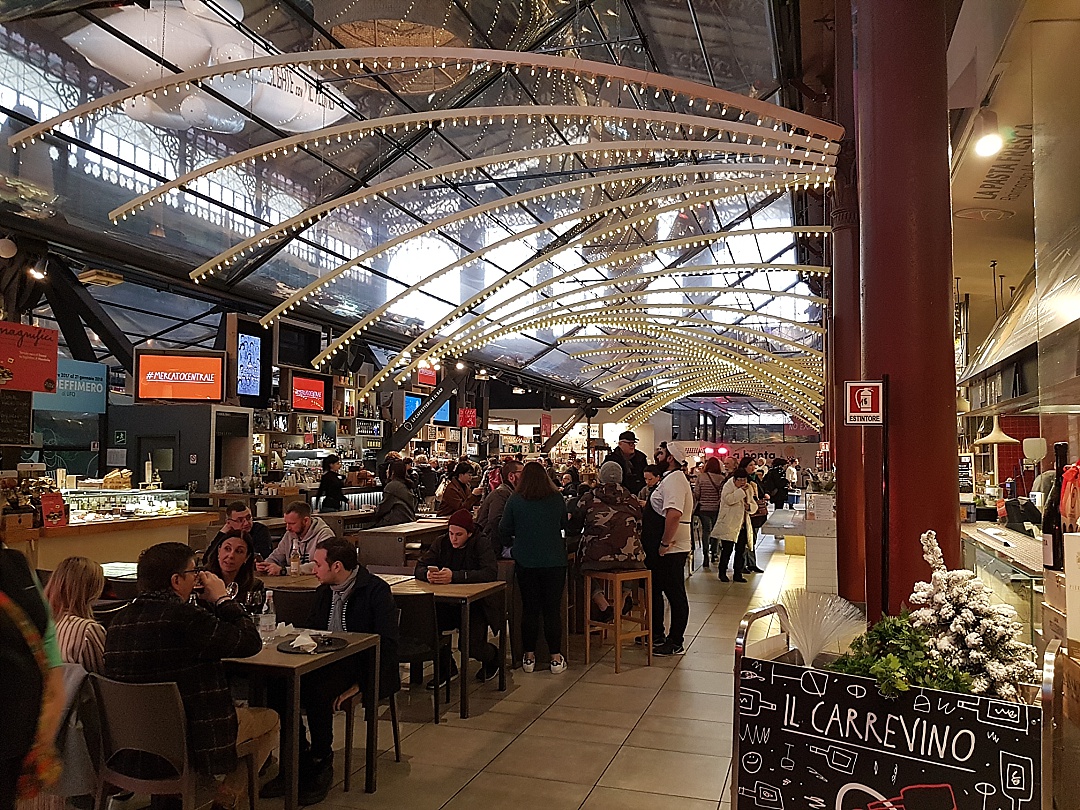 Every café and sandwich shop not only has amazingly fresh paninis, pasta, pizza, calzones and pastries etc. but also serves alcohol too. Fancy a beer with your Gelato? No problem!

Three days was certainly enough time to see everything we wanted to in Florence, it didn’t seem like we were trying to cram everything in so, on the fourth and final day, we decided to head to Pisa to get a glimpse of the leaning tower. It took us 20 minutes to walk from the station to the tower and I was pleasantly surprised to see that it actually did lean (a lot), it was in an area called, Piazza Del Duomo. Surrounded by other fantastic buildings, the tower is actually a bell tower, next to that you have the Cathedral, then the Baptistery and the cemetery. If we didn’t have a plane to catch we would have loved to explore this area further. My advice to you if you are planning a similar trip, maybe factor in a night in Pisa too. 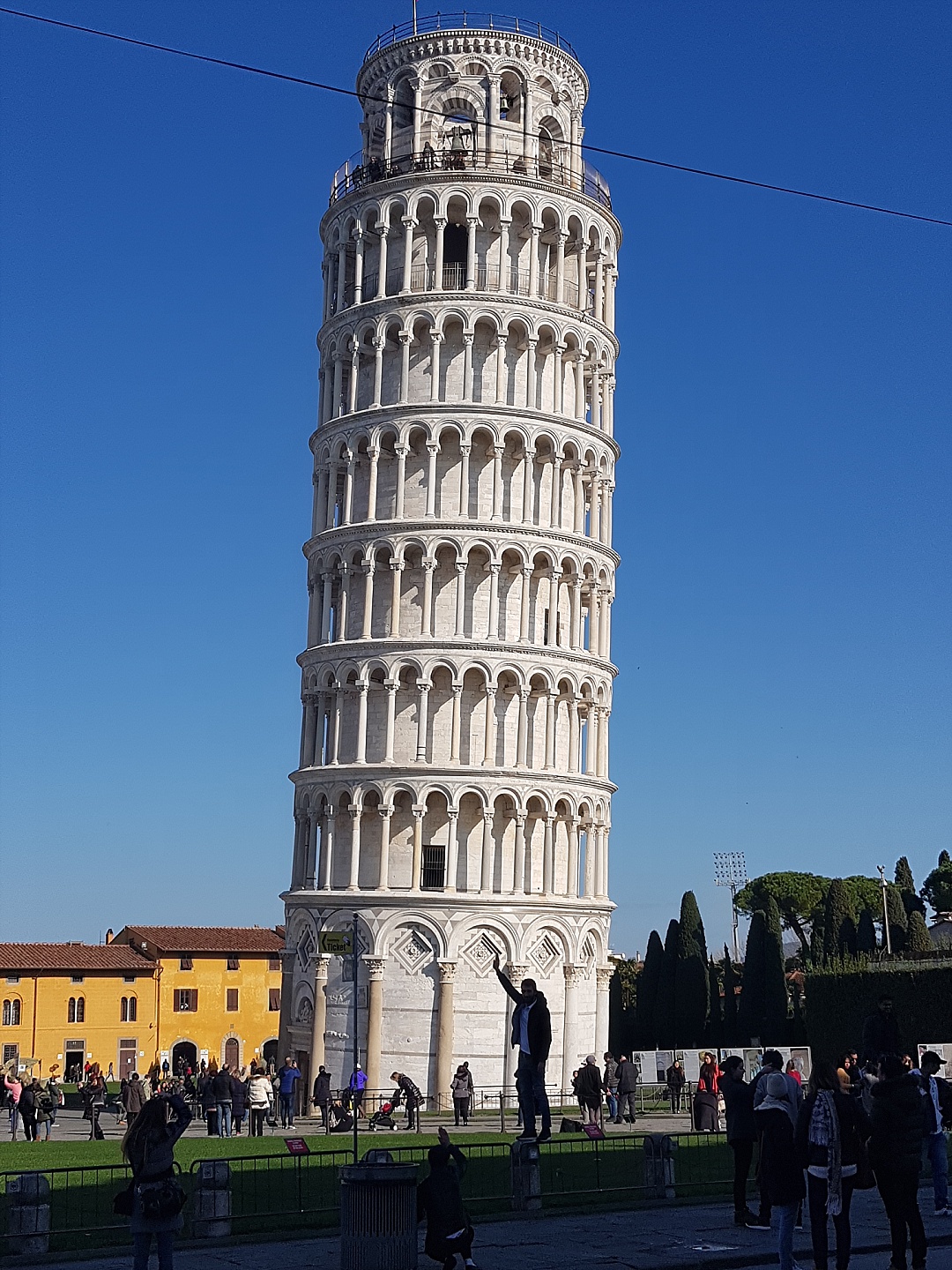 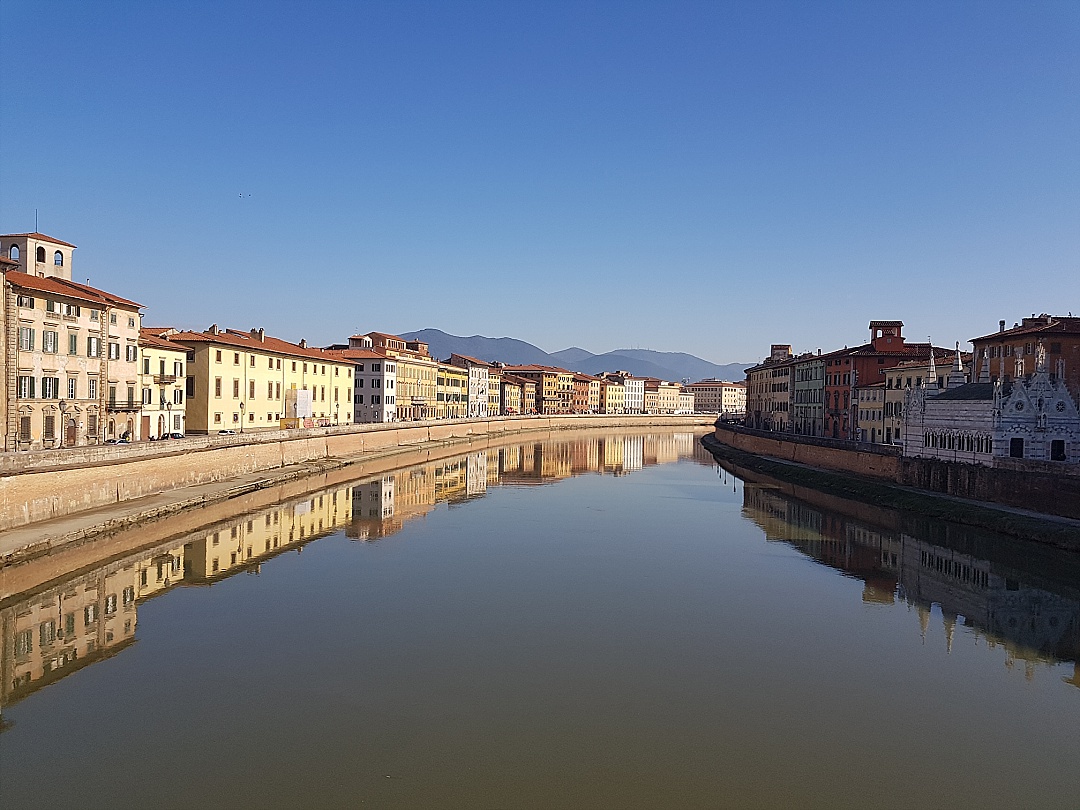 We didn’t really get to use our Italian much as everyone we met automatically started speaking English to us. It got to the point that I was willing people to start talking to us in Italian but, alas, we just looked like Brits abroad. The Italians couldn’t have been more welcoming to us. I heartily recommend a visit to Tuscany for the romance, for the history, for the food and wine and just for the feel good factor. I doubt this would be good for young families as there’s a lot a walking involved and A LOT of cobbled streets, pushing prams over them would have been a nightmare. For a couples getaway though, it’s utterly perfect.