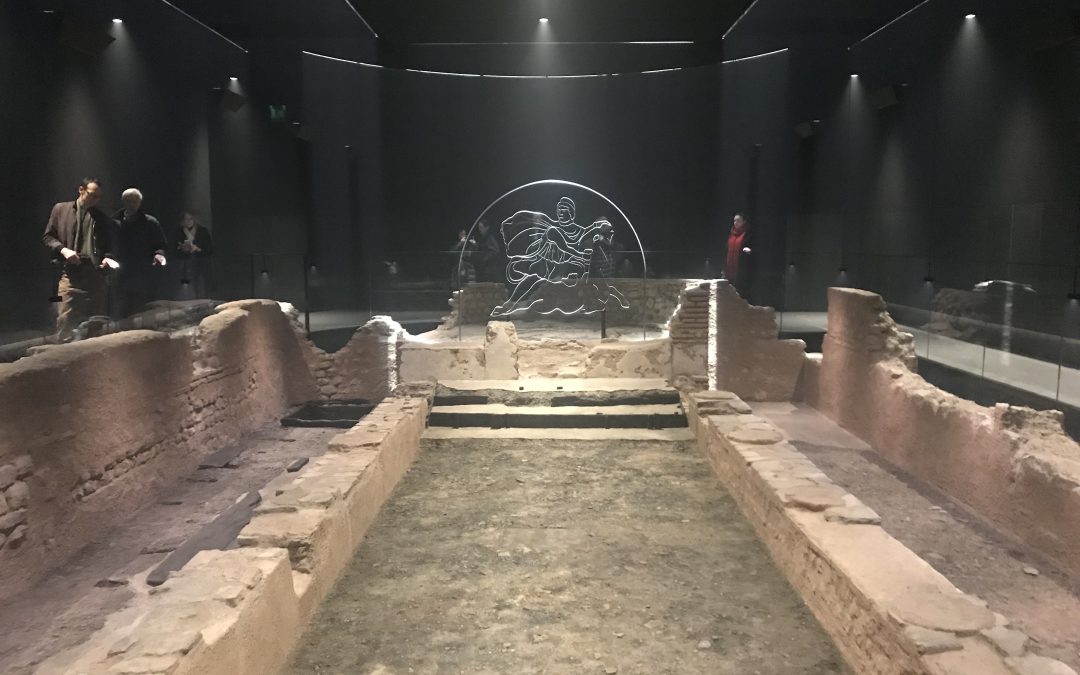 London, albeit my beloved home, is a very expensive place. But, sometimes you can unearth some mighty fine places that cost you absolutely nothing! And one such place is the London Mithraeum.

The temple was discovered ‘by fluke’ after World War 2, on a bomb site. It generated huge public interest and was eventually rebuilt 100 m away. Although it was acknowledged as a great Roman monument, the reconstruction was heavily criticised. When Bloomberg acquired the site in 2010, they became responsible for the site and taking it to the next phase. They were able to work with experts to dismantle and reconstruct the temple in its original location, and making it accessible to the general public.

Underneath Bloomberg Space in the heart of the city, lies the reconstructed ruins of the Mithraeum temple. However, as you walk in on ground level, you are greeted by a space, currently occupied by the work of Isabella Norton called ‘Another View from Nowhere’. The structure and the tapestry are inspired by the location, both geographical and archaeologically. 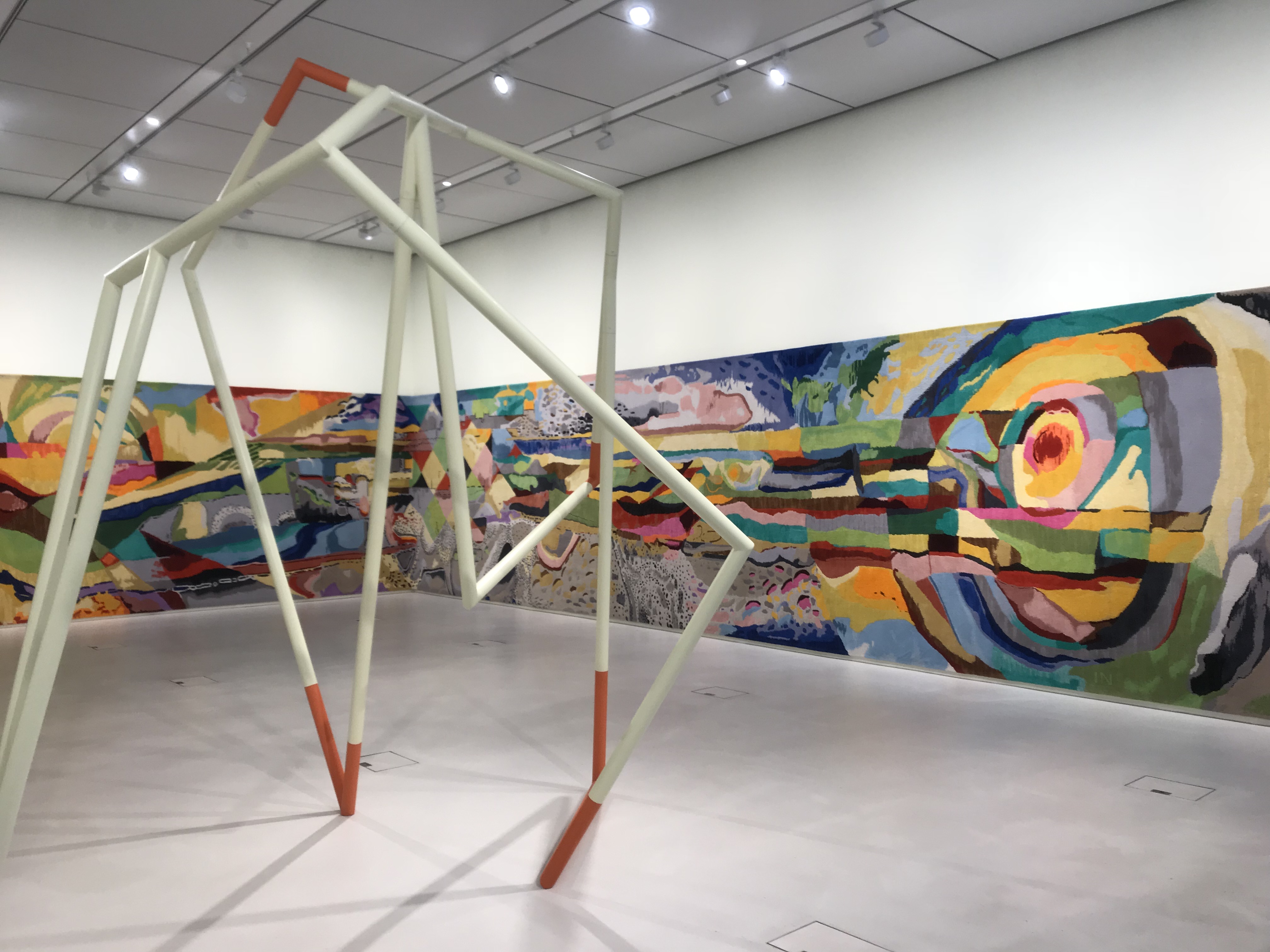 Moving around the corner, an inventive wall displays shows the artefacts that were discovered on the site as Bloomberg built their European headquarters. Just as our belongings tell a story about us, these too are a glimpse into our Roman ancestors who once lived here. The tablet provided (or you can download an app) helps you navigate the artefacts and gleam a little more information. 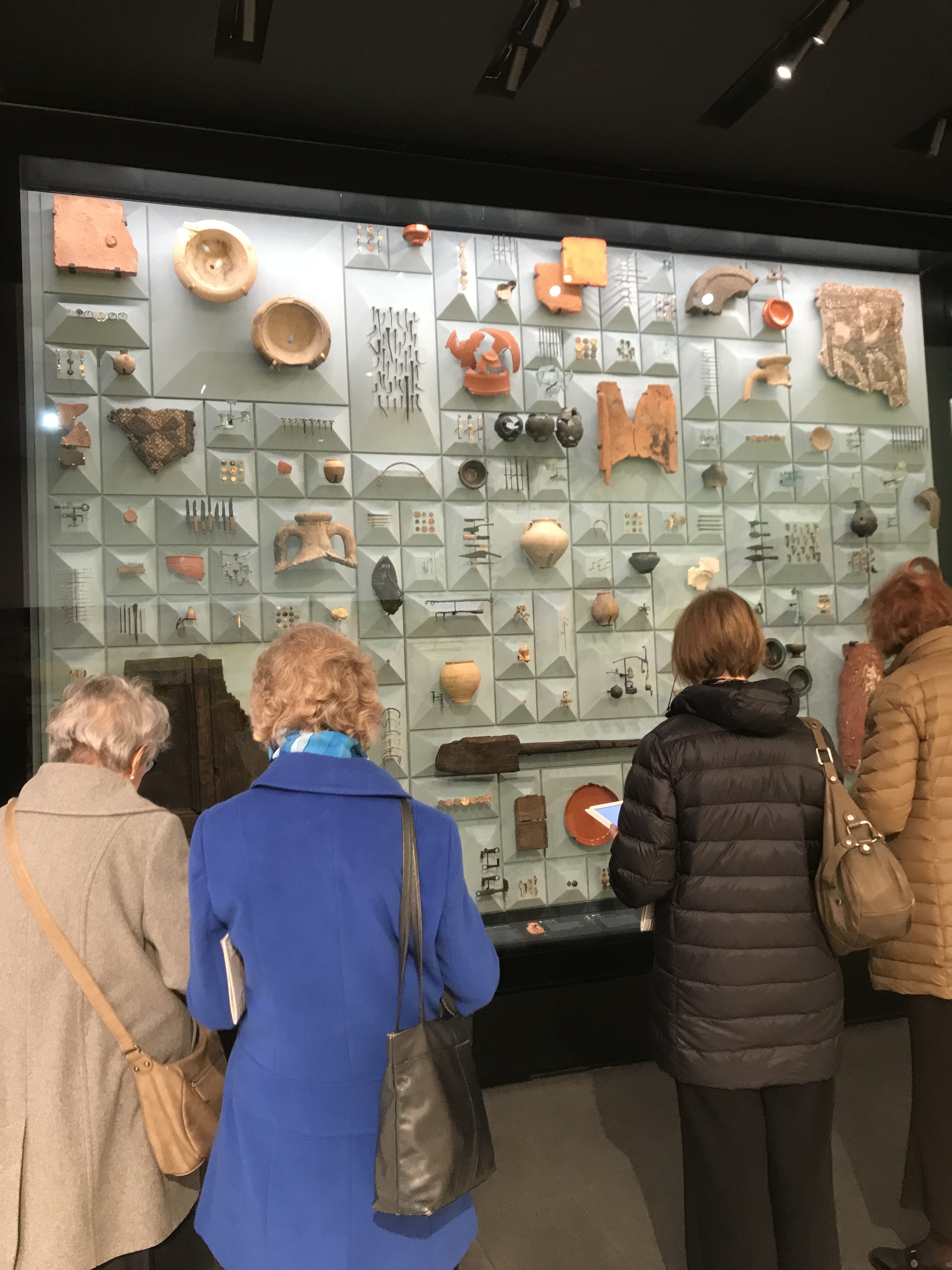 Apparently 140,000 individual artefacts were recovered, giving us a real insight into how our capital city was founded under Roman rule. My own personal insight made me realise how many of the jewellery and clothes have influenced styles and fashions into the modern day! The gladiator sandals were very ‘on trend’ a couple of summers ago!

Then it is time to descend under gound to the ruins. An obvious thing to ask is why did our Roman ancestors live under ground? They didn’t. Centuries of civilisation and their accompanying landfill has led to the ground floor rising. This blew my tiny mind, I don’t mind admitting!

The London Mithraeeum was a temple of worship for the Mithras cult. The artefacts have helped to rebuild a picture of how we think they performed rituals and worshipped. The mezzanine level helps explain the theories behind the Mithras cult. I couldn’t help but think that the dark space with a galaxy projected onto the walls would be a rather good party space!

The temple itself, is within a dark room. enhanced by lighting and sound effects, making it more of an experience than merely observing some ruins. I was struck at how few places exist like this, and how lucky we are to have a 1800 year old temple within our city. If you think enthusing your children to visit an archaeological site may prove tricky, I think the execution of this into something that is more of an installation with a definite immersive element, may not just persuade them, but you will actually take them to somewhere they really enjoy. 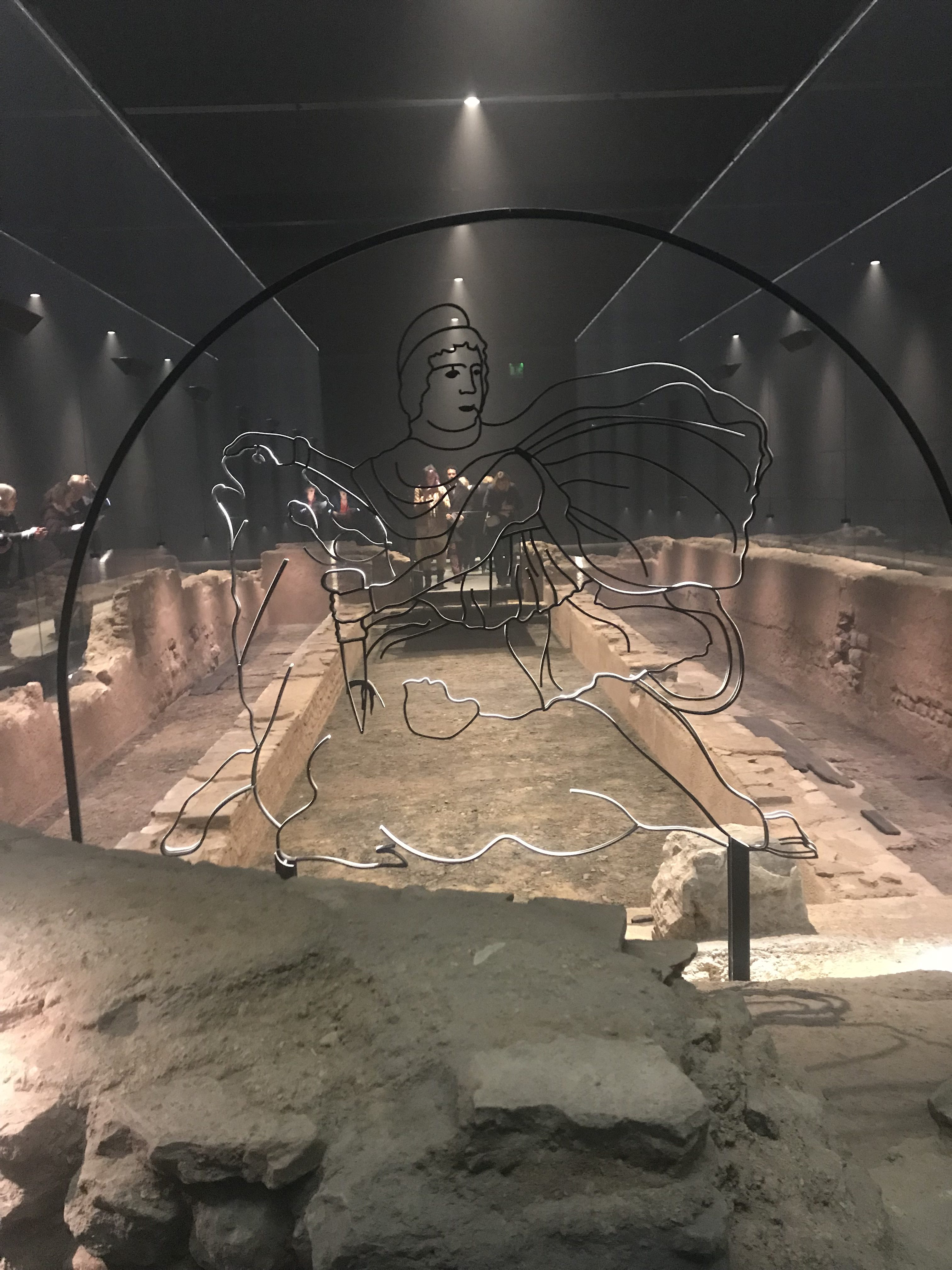 To visit the London Mithraem, you need to make an advance booking, and it’s open Tuesday – Sunday, however, it is absolutely free. 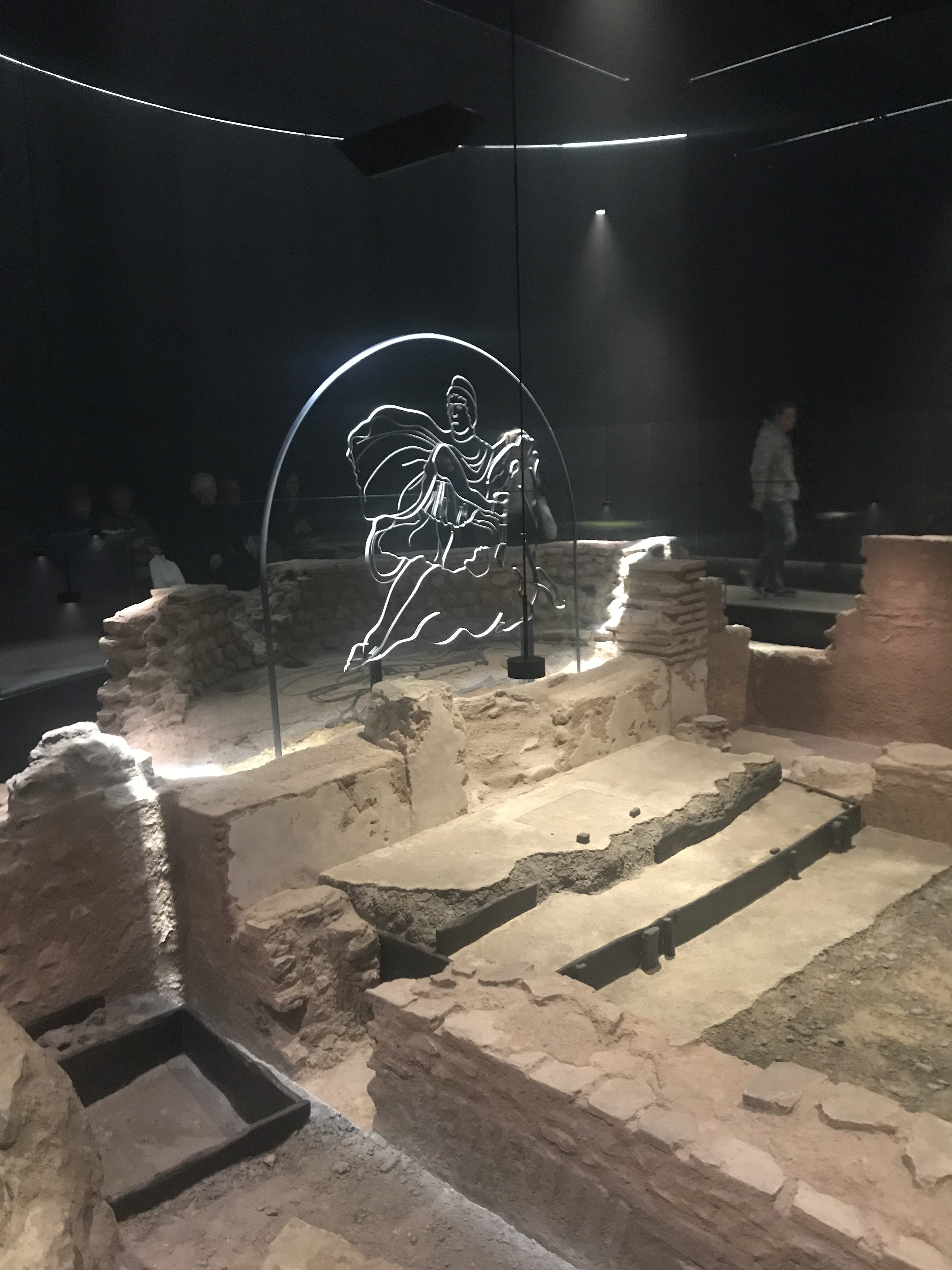 There are more ideas on what to do in London in my Exploring London series. 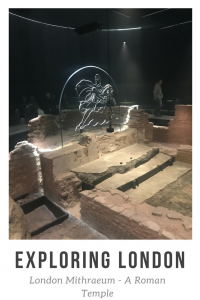