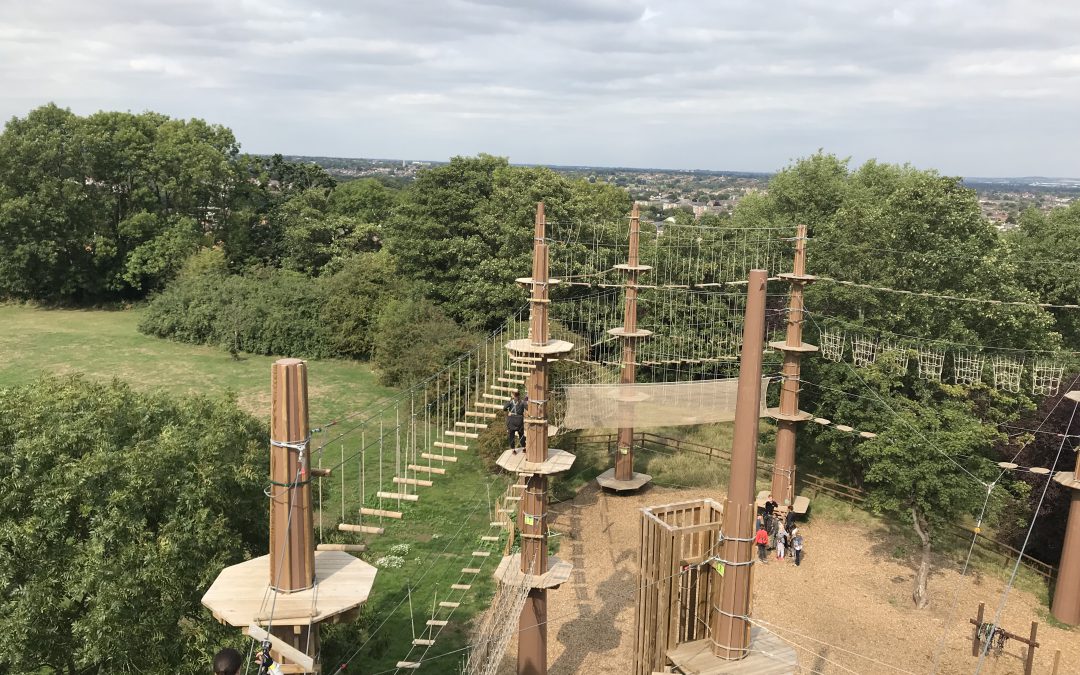 It’s not often we venture North of the river. However, whenever we have visited (we LOVED Kenwood House) we are pleasantly surprised at the delights to be found in the foreign country of North London. One such surprise, was the rather interesting Go Ape in Alexandra Palace.

The kids had done the junior course over at Battersea Park, and loved it, but as they’d grown, they needed more of a challenge. Luckily, both kids were over 140 cm and could tackle the newly opened try tree top course at Alexandra Palace.

I had booked three spaces, honestly believing that I wouldn’t have to do the course, however one reading the small print, I realised very quickly, that under 14s needed to be supervised and there was no way I was getting out of this. 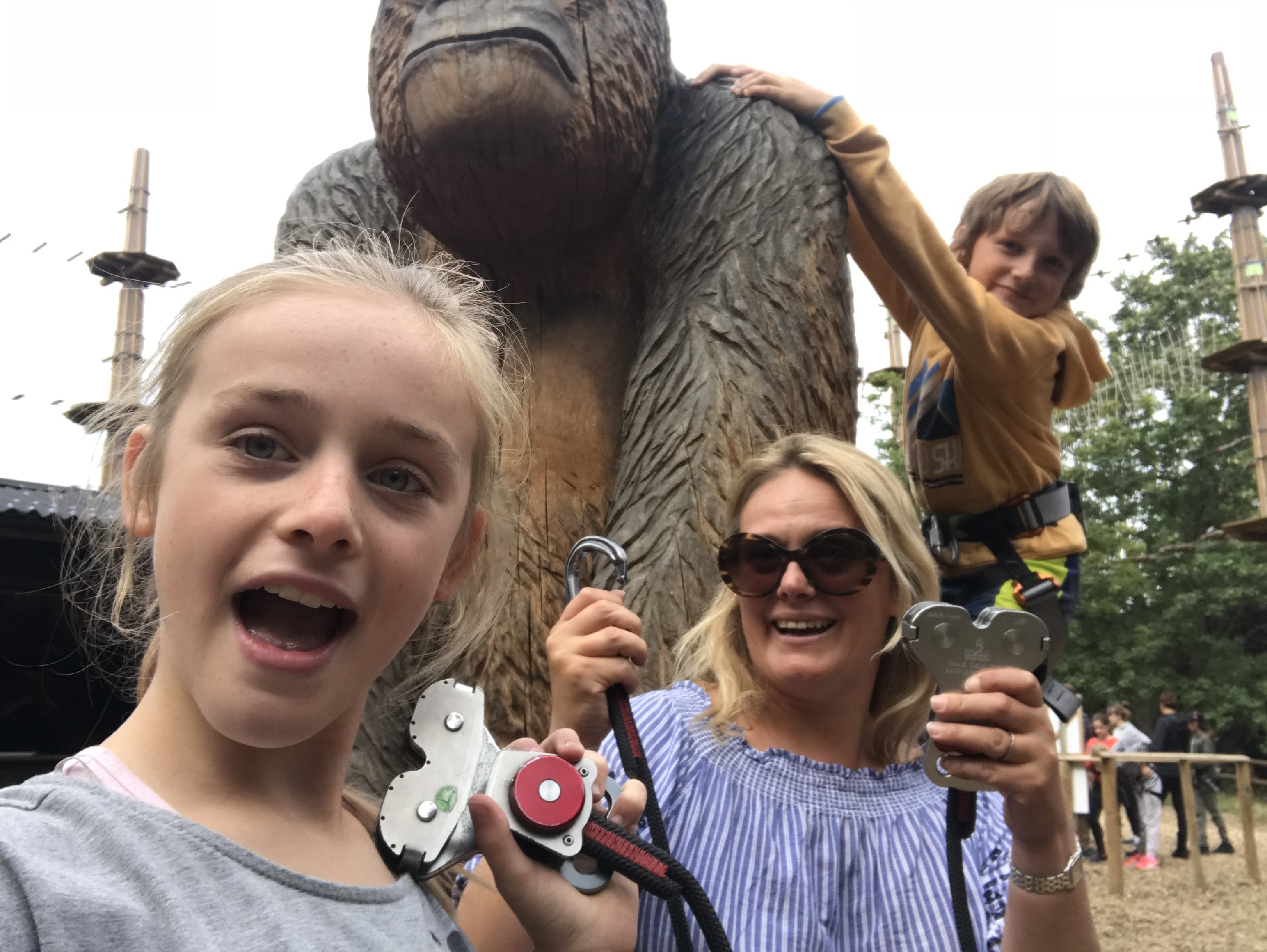 The staff at Go Ape are extremely thorough, and even during the practice during the safety demo, as I wobbled across the practice rope, I feared for my ability to complete the course.

And we set off on the first of three tiers. The kids bounded ahead of me, whipping over the criss-cross and tightrope wires. I tentatively took my time, absolutely petrified of the drop below me. However it was at this point, the first positive of Go Ape came to light: The views looking over London were spectacular. Until this point, as the fear consumed me, I’d seen very little to get excited about! 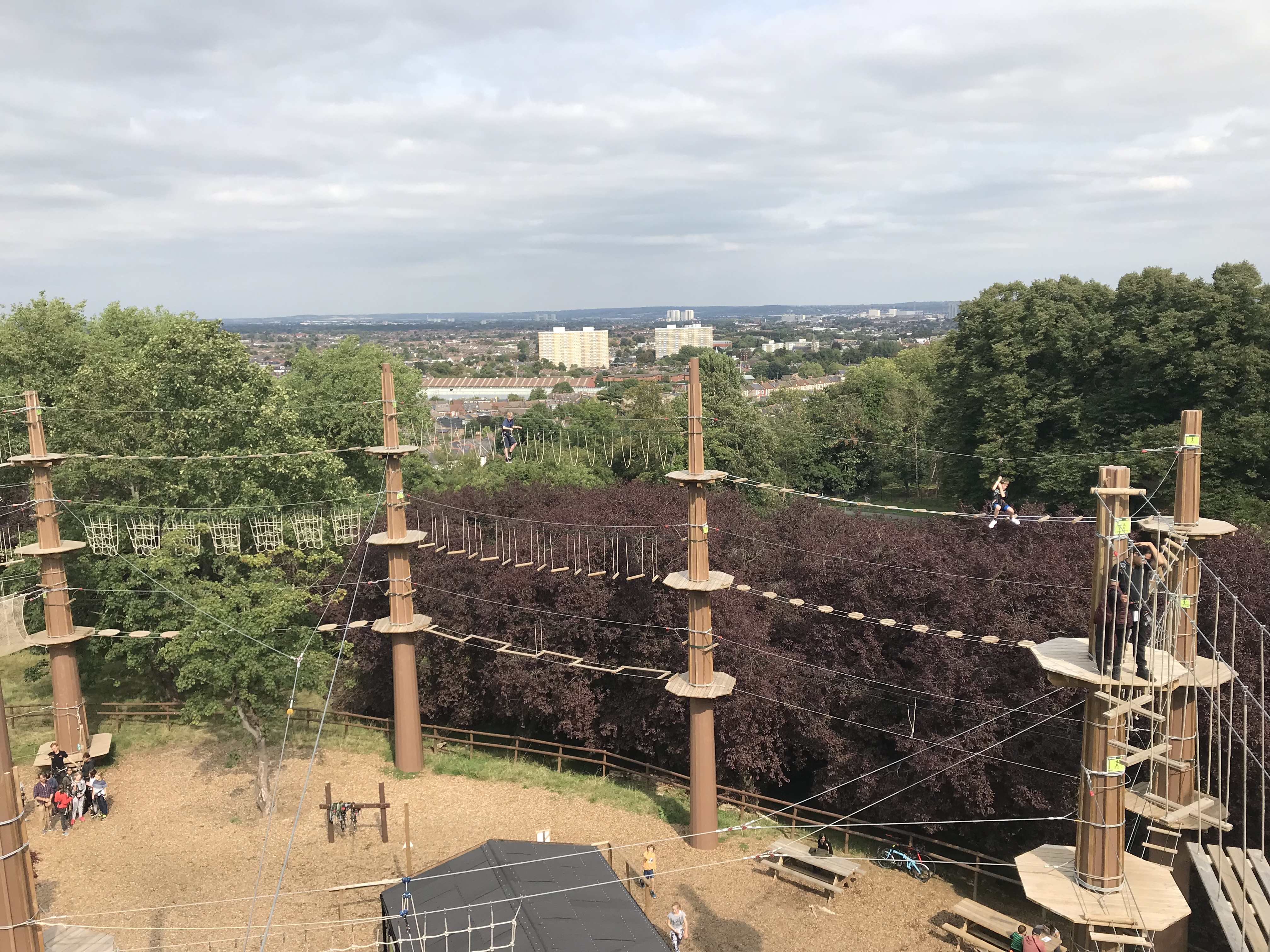 Then, something happened: The children took control of the situation. They could see I was scared, they could see I didn’t really want to be doing this. I felt totally out of control, and I didn’t think I could trust the harness to prevent me dorm plummeting to the ground. As a mother, we control situations and protect our darlings from any harm. Suddenly my moody teen was encouraging me to walk through course – explaining the best way to tackle the obstacles, cheering me on: ‘You’ve only got five more to go! You can do this’. 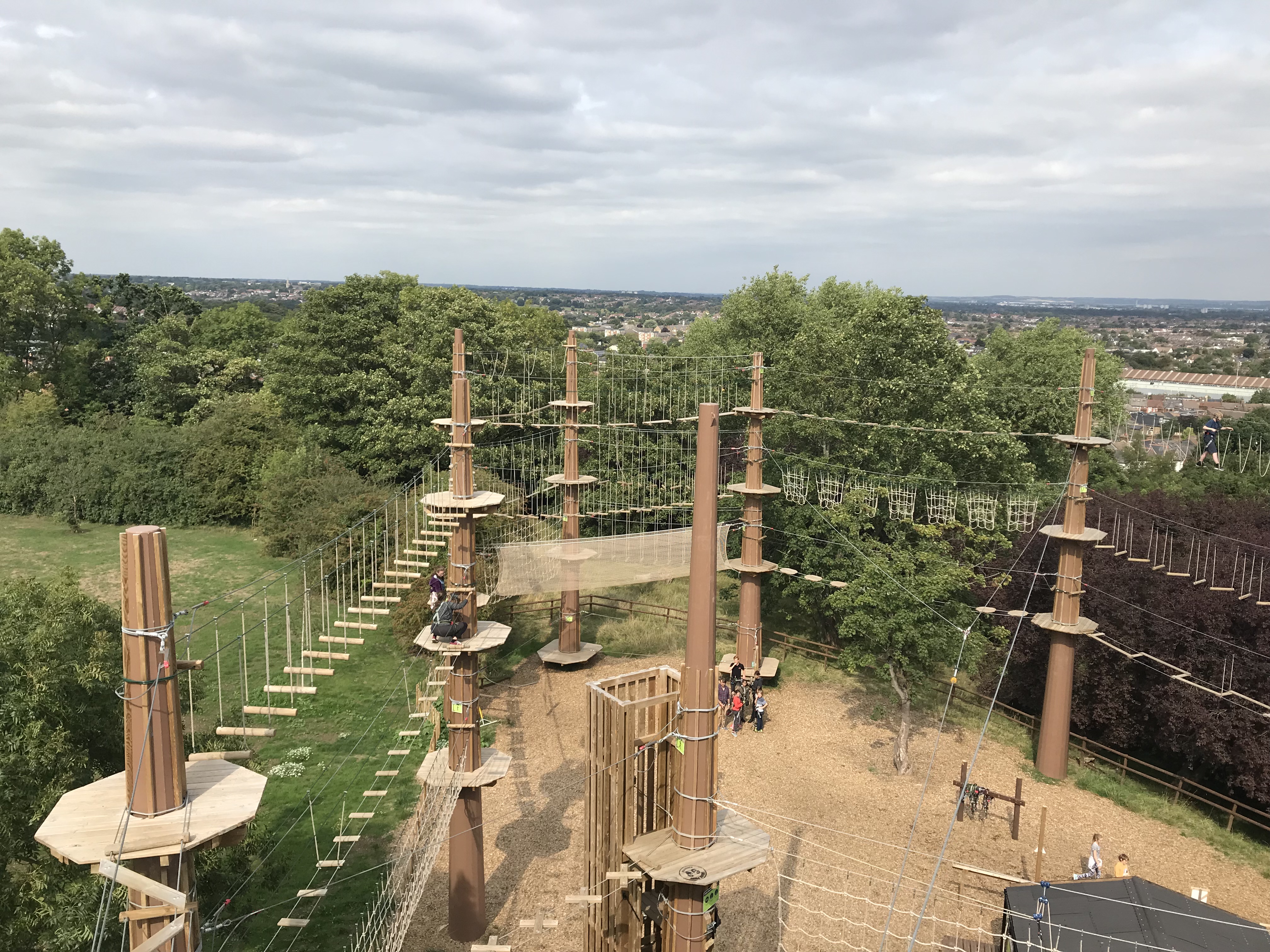 Before I knew you it, I was careering down a zipline (landed on my bum, everytime), and tackling the second and third tier. I even tackled the jungle swing, by hurling myself at a midair cargo net. I realised I had to place my trust in the harness, and it felt quite alien to place such trust in an inanimate article, but once you do, the inner ape is released … 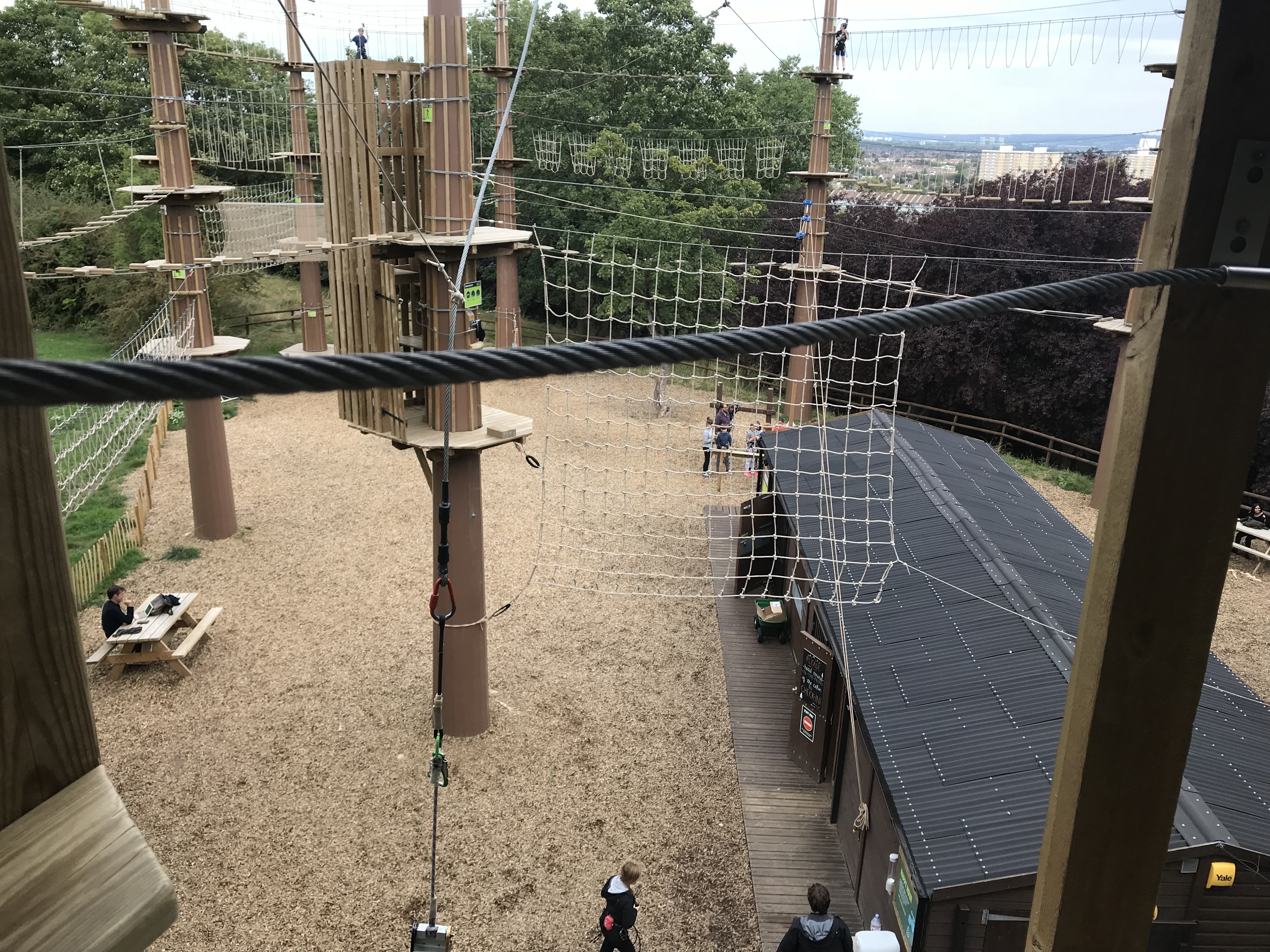 Our biggest two obstacles came right to the end. We came upon a twisted bridge. My ten year old was first to face the bridge, and I could not see how he would get across without falling. I’n no good at physics, but as he approached the twist, suddenly the bridge ‘jumped’ straightening out so he could get across. As he squealed that it was ‘TOTALLY SCARY!’, I worried about my ability to get across … even as my daughter safely navigated it, she was worried ‘Mummy would fall’. ‘One step at a time, Mummy, it’s the next one’, and then boom! Before I knew it, I was across and course complete! 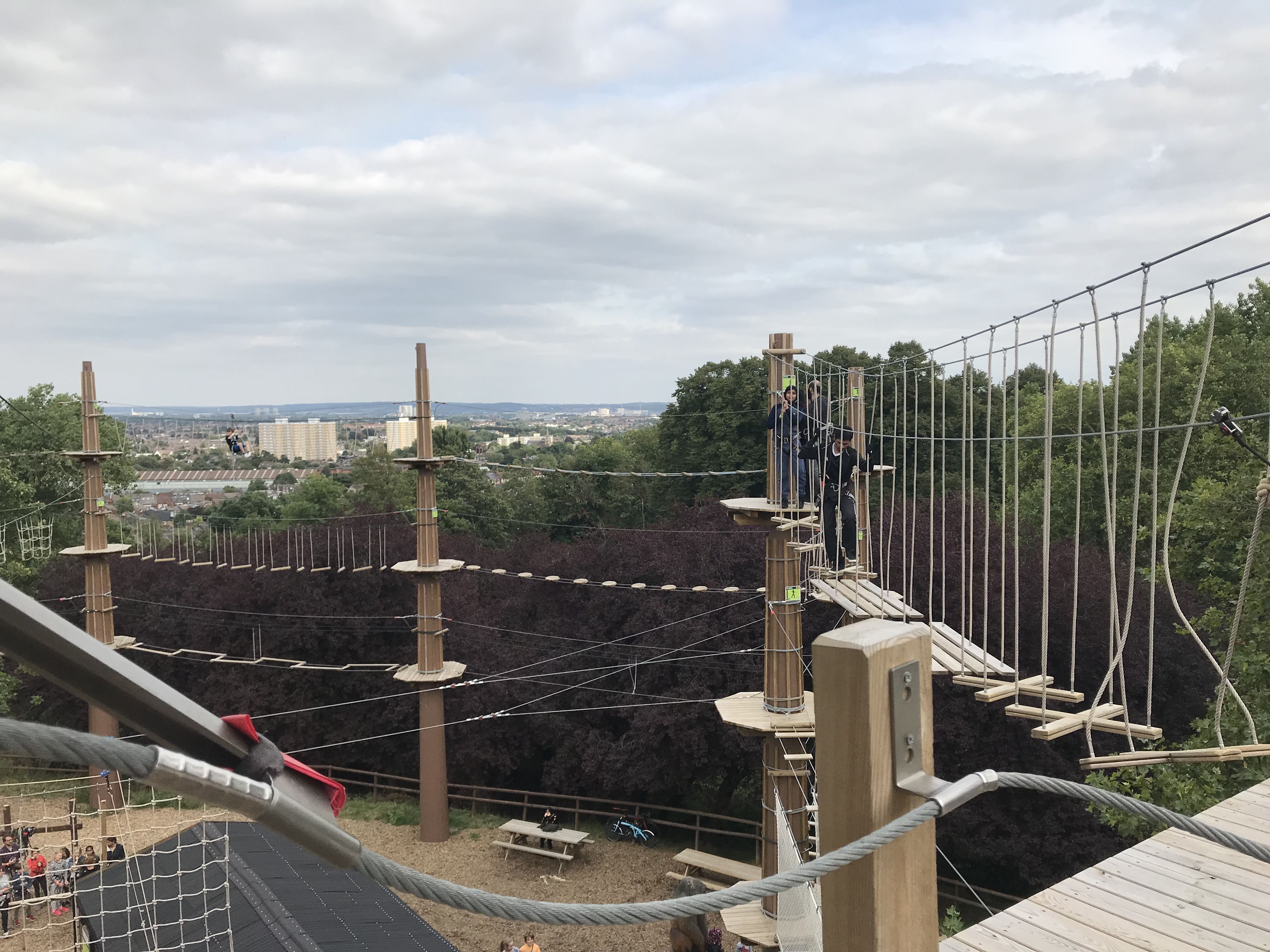 Actually, that was a lie. I then had the delight of the ‘plunge’, which basically means you step off a 50ft platform to the ground.

My son went first, and as a mother, it’s the worse thing you can see: He just disappeared off a platform! My daughter wobbled and took some encouragement, I just stepped: Let’s get it over with!

Go Ape challenged me both physically and mentally: My hands were so sore by the end from the frantic gripping on! Mentally, I had to let the kids take charge and guide me through, our roles completely reversed as they took me through the course. If they hadn’t been there, I am not sure I would have done it. It made me realise, that as we enter the challenging teen phase, there is a compassionate soul in there, who can motivate and encourage and congratulate. I’m not always the recipient of the ‘rolled eyes’!

At the end, I felt euphoric, and that I had really achieved something, and of course, I’d worked as a team with my kids to get it done!

It was a smashing day out, and don’t tell them, but I’d actually quite like to do it again! 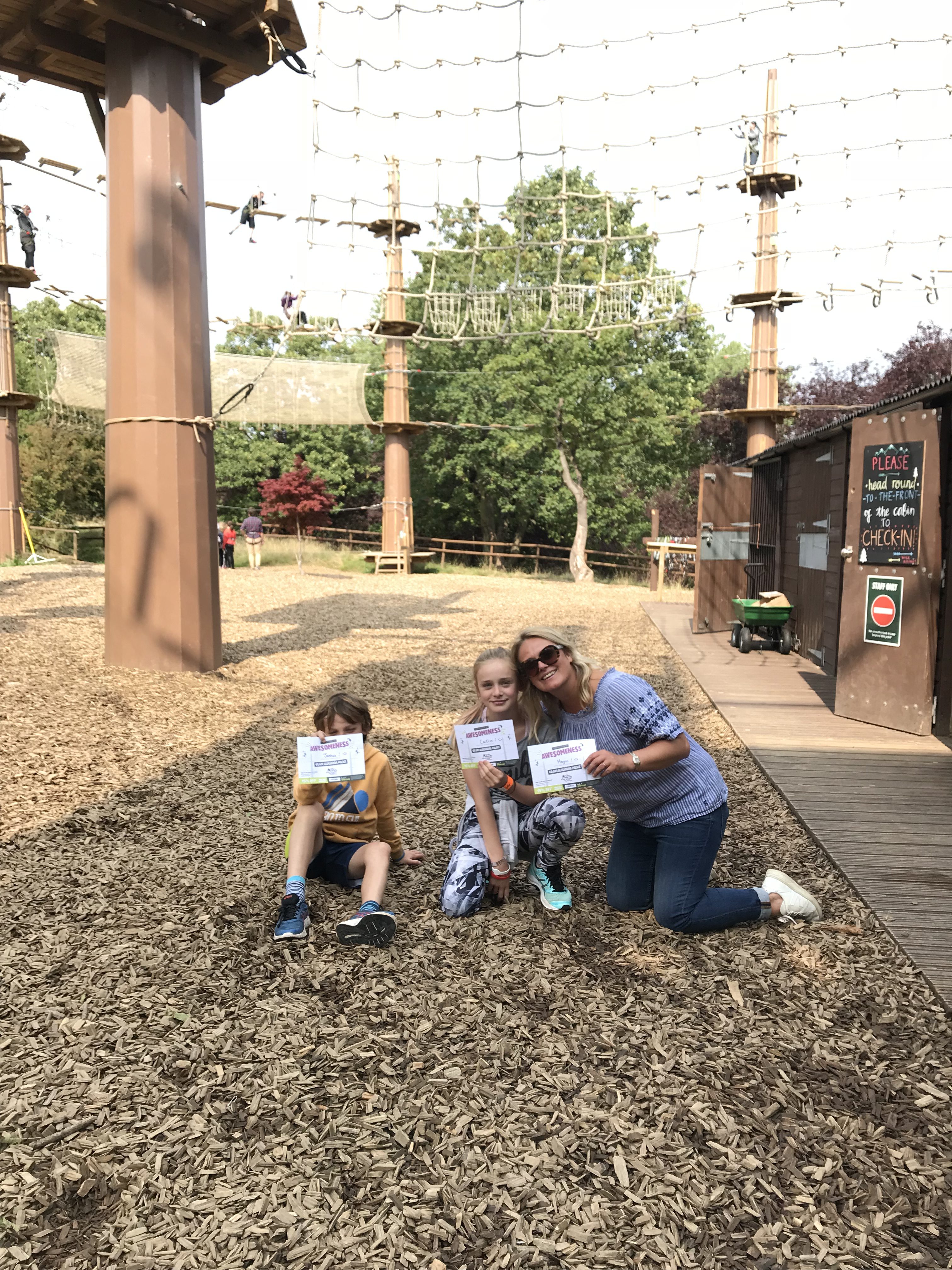 For more of our London adventures, look at Exploring London Series

You have to be 140cm or taller to take part in Go Ape, TreeTop adventure. The course took us roughly two hours to complete. Prices start from £28 per person. For more information please check out Go Ape, Alexandra Palace. We were given complimentary tickets in return for this review, but all words, opinions, pictures and absolute fear, exhilaration and achievement are my own