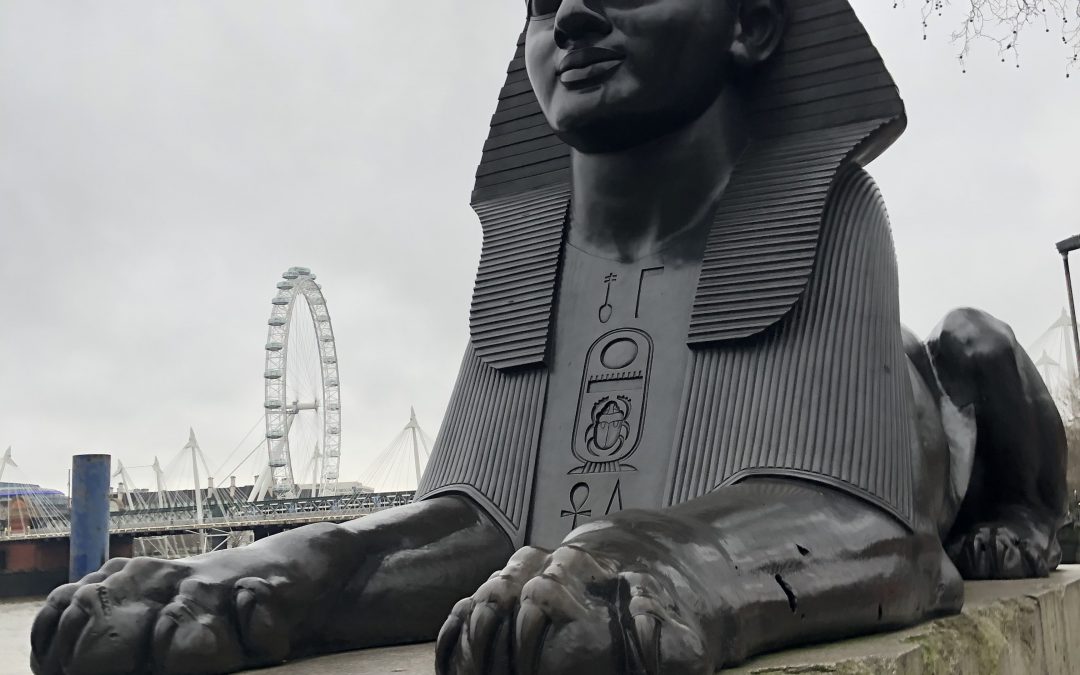 Right on the Embankment, standing tall, is Cleopatra’s Needle, flanked by two rather stunning bronze sphinxes.

The needle itself is an original Egyptian obelisk, reportedly built 3500 years ago in 1460 BC for Pharaoh Thomtmes III. Originally, it was located firstly in Heliopolis and then in the royal city of Cleopatra, Alexandria. But how did it get to the banks of the River Thames?

The obelisk had actually been buried in sand for over 2000 years, having been toppled. This probably did it some favours, as the sand preserved the hieroglyphics inscribed into the granite stone, thus, to this day, we can ‘read’ them, should you be versed in hieroglyphics. However, in 1819, its geographical location was to raise it, as Cleopatra’s Needle was offered to the British government by Muhammad Ali, in commemoration of the victories of Lord Nelson at the Battle of the Nile and Sir Ralph Abercromby at the Battle of Alexandria in 1801. However, the offer was initially declined as the cost to transport it to the UK was seen as too exorbitant. 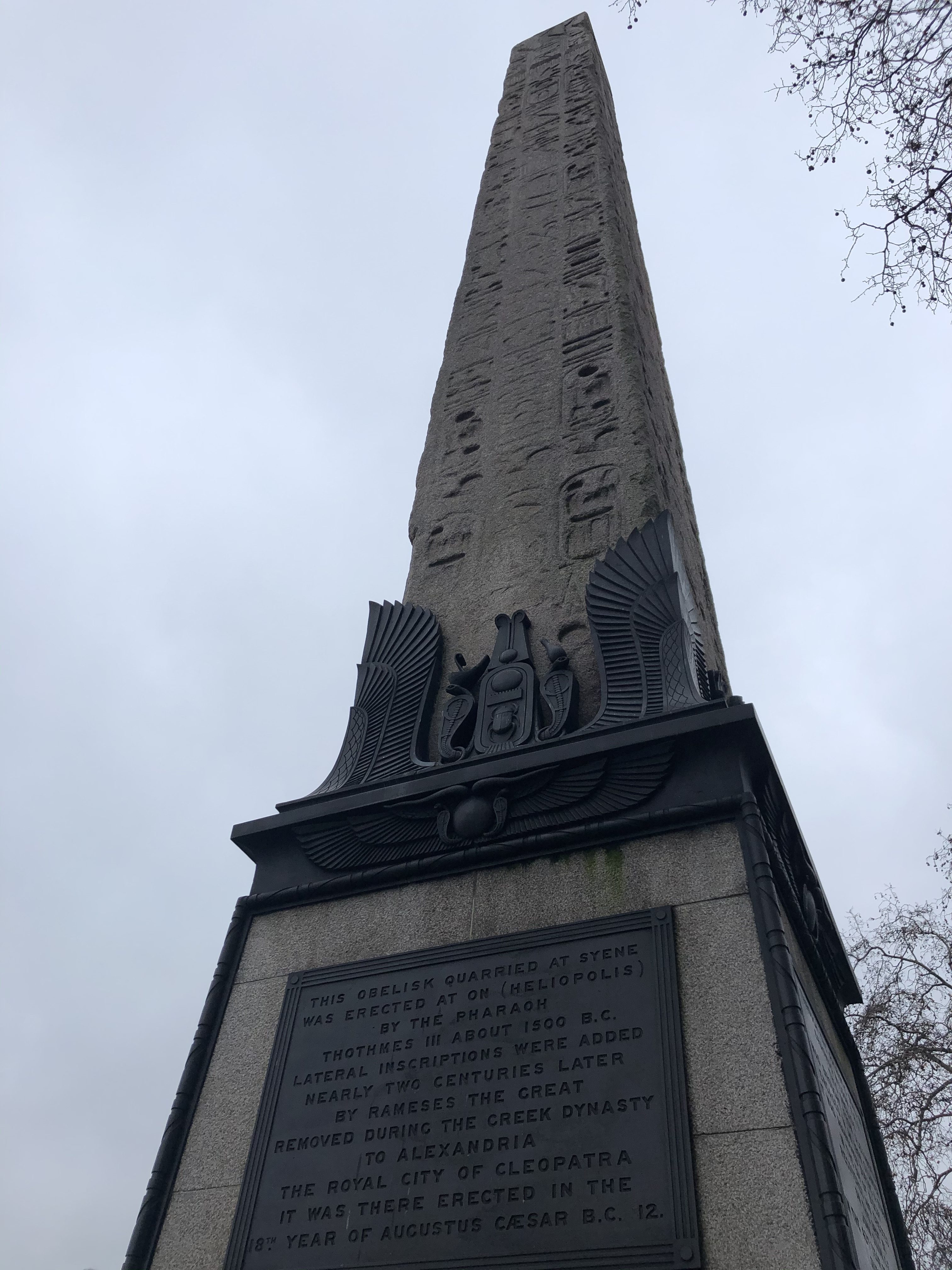 However, in 1877, dermatologist and Egyptian antiquity admirer, Sir William James Erasmus Wilson, stumped up a sum of between £10,000 and £15,000 to relocate it to London.

Of course, transporting an obelisk made of red granite, of about 21 metres height, weighing approximately 203,000 kgs, does not come easily. Encased in a metal iron cylinder that was then towed to London. However, it hit a storm in the Bay of the Biscay and the towed-needle became out of control and the rescue party, capsized and lost their lives – they have a dedication plaque on the obelisk.

Left to sink, all efforts to rescue were abandoned. But, items of great historical importance don’t give up that easily, and Cleopatra’s Needle did not sink and floated for the next four days, until some Spanish fisherman found it drifting in the bay. Eventually, a boat towed it back to the UK, arriving in Gravesend in January 1878 to an audience of probably quite-pleased children who were given off the day from school!

Finally erected in September of 1878, the obelisk was given two bronze sphinxes to flank it. It seemed that all was well … until the first World War, when a bomb from a German air raid inflicted damage on the right hand sphinx. These days, Cleopatra’s Needle is subject to the pollution from the heavy traffic on the Embankment, and the local council regularly cleans it. 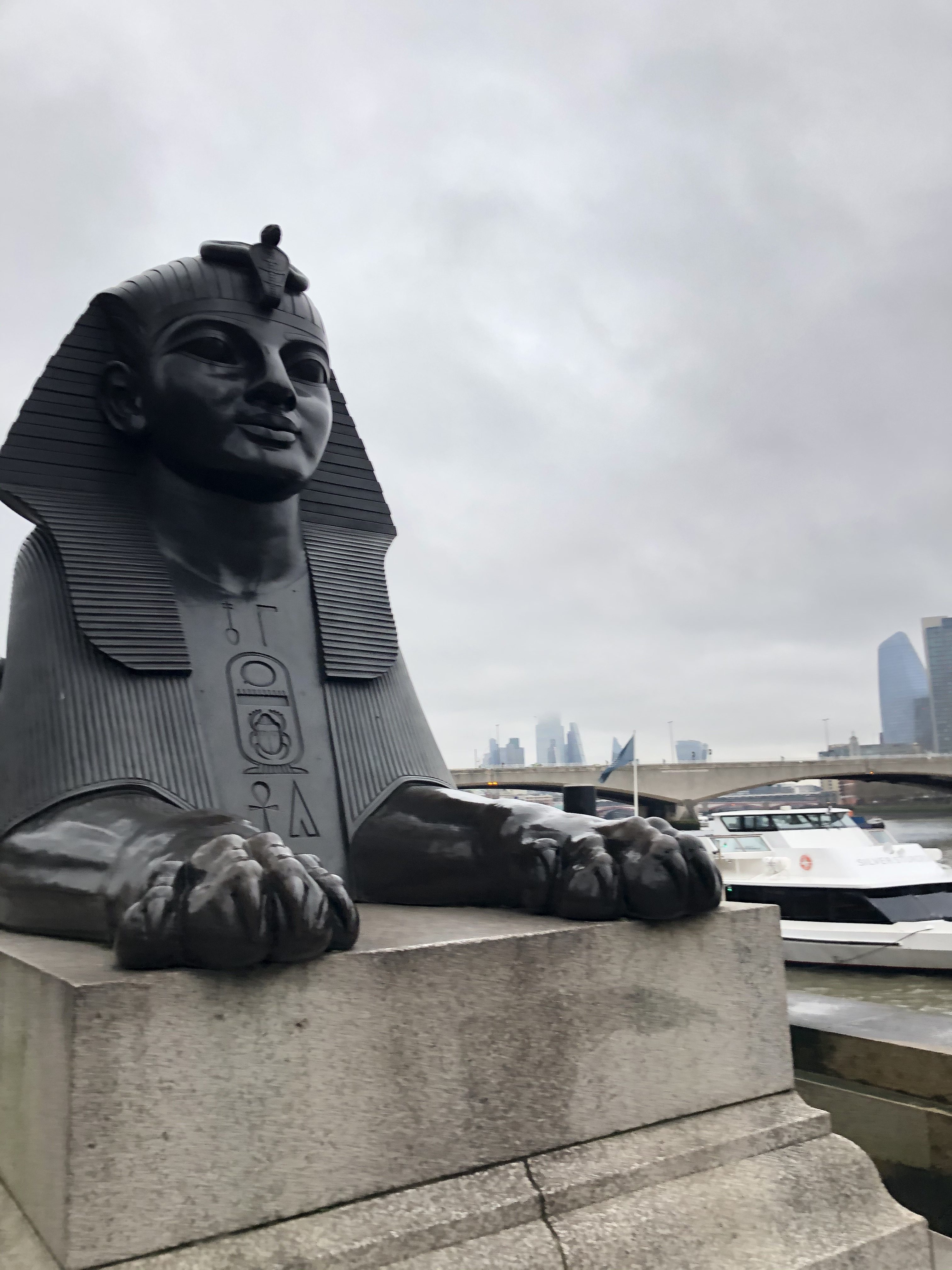 Whatever Cleopatra’s Needle encounters: whether it be transportation, weathering, toppling or storms, it seems to stand firm and tall and carries on being admired by the 1000s who clamour to it for an Instagram shot (currently, over 3000).

For those interested in the hieroglyphics, they have been translated as praising Tuthmose and commemorating his third sed festival. Later inscriptions were added by Ramesses II to commemorate his victories.

Of course, there is now the moral argument of whether the needle should be transported back to Egypt, but that is an entirely new blog post.